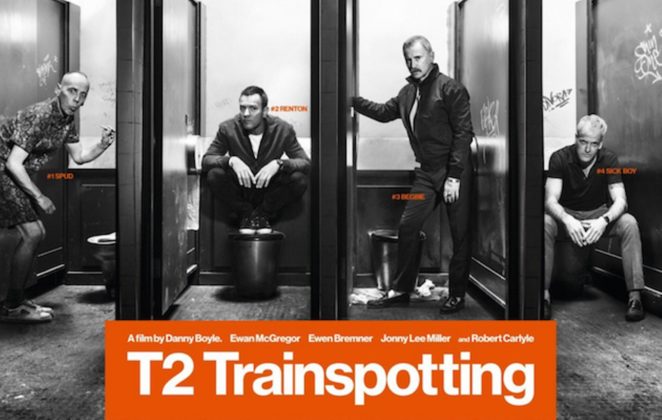 So, should there ever be a sequel to Danny Boyle’s Trainspotting (1996), the uber cool hip comedy movie of the 90s that mesmerized a generation? Glamorizing drug use was questionable but the cast and soundtrack was not and the iconic movie remains a seminal piece in cinema history. Well the answer was yes and two decades later we got that sequel and just about worthy of the original classic, to everyone’s relief.

Its twenty years since Renton stole that £16,000 grand of drug money from his friends, using it to start a new life in Amsterdam. But the 46-year has returned to Edinburgh after having a heart attack in a gym. He has been clean for those two decades but his marriage has failed and he is about to lose his job in Amsterdam.

Daniel “Spud” Murphy has fallen back into heroin addiction and suicidal after having lost everything, including his wife Gail (Shirley Henderson), and visitation rights with his teenage son, whom he fathered shortly after Renton left.

Simon “Sick Boy” Williamson (Johnny Lee Miller) is sill hammering the cocaine and now runs a failing pub, and engages in blackmail on the side by filming married businessmen sleeping with his Bulgarian girlfriend Veronika (Anjela Nedyalkova), who is not best pleased with the money making scheme.

Our final protagonist is the fearsome and violent Francis “Franco” Begbie

( Robert Carlyle), serving a 25-year prison sentence after being arrested following that drug deal two decades ago, and attacking his lawyer after being denied parole to get two more years on his sentence.

Renton goes to Spud’s apartment to say hi but just in time to save him from a suicide attempt. Renton then visits Sick Boy at the pub, where Sick Boy attacks him. As tempers calm Renton meets Veronika and pays Sick Boy back his original share of the money as an apology.

Meanwhile, Begbie escapes from prison. He returns to his girlfriend’s flat and meets his college-bound son, Frank Jr., the kid quickly recruited into the family business, robbing houses. Bet Begbie lost the most when Renton did a runner and out for vengeance with smarty man. It’s time to find out if the boys are still true friends.

I enjoyed it to a point, like the critics said, they didn’t mess it up and it wasn’t just a cash –in and so phew! It’s too classy to mess up. Danny Boyle has integrity and he would only do it if it would work and be acceptable and it was. I’m not really into the music and drug cool culture movies project but still appreciate Trainspotting for what it is, super smart and relevant to the time. Film two was more conventional and nostalgia the emotion I was left with.

Its $18m budget did a decent $43m back and a third film is not impossible now. The best joke in it is the 1691 credit card scam one and who knows, that may actually work. The humor is mixed in with that pathos like all Danny Boyle movies and still an intelligent script with a bit of that familiar Renton ‘Choose life’ narration in film two to be had. I can kind of identify with the Renton character of the guy who thinks about stuff being bought up in a working-class community where they struggle with that concept and so resonated with me there.

I think Trainspotting fans will get enough from this to enjoy it and feel they spent their time well and likewise for other film fans. It’s nothing special though. Ewan doesn’t really put his heart into in the lead where as for Johnny Lee Miller and Ewan Bremner they are just happy for the work and exposure and do go for it. But the film lacks that original spark and uniqueness from film one and so won’t be troubling anyone’s top ten any day soon. Sometimes films were just good because they were of the moment and this was not that moment.