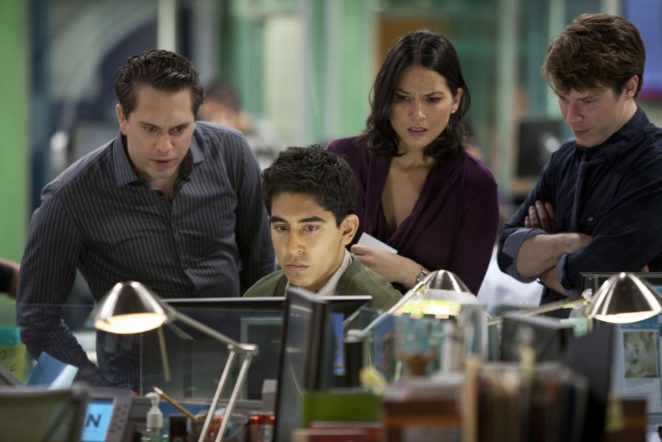 The West Wing for me was probably the greatest TV series I have ever enjoyed. It was smart people walking and talking really smart things really quickly whilst doing laps of the White House all day of which half the lines were too clever for even the actors to understand. But I knew not everyone got this show and I was getting some it so I was not as stupid as I thought I was. But after six seasons of President Bartlett and his loyal Democratic Party it all ended and I needed a new fix. We thought and we hoped brilliant writer Aaron Sorkin would do six seasons of a Republican West Wing White House but it was not to be as he went into films and did that boring Facebook movie. But, thankfully, in 2011-12 he returned to TV writing and we got The Newsroom, a kind of West Wing in a TV station, centered on the fictional cable station ACN.

The Newsroom, alas, did not prove too popular with the TV and printed news media it was portraying with many negative reviews in the posh papers. In fact it was Aaron Sorkin’s first pilot series not to be Emmy nominated because of that negativity. Even his  Sports Night show got more awards attention than this, Sorkin’s little known first TV series. But don’t let that put you off. If you liked the West Wing you will enjoy this. It’s smart, sexy and funny and it’s talking to you.

This is a review of the third and final season that aired in 2015 on DVD.

Phlegmatic Newsreader Will McAvoy (Jeff Daniels) is the star of Atlantic Cable News primetime news hour live from the city of New York. The late night news show has been revamped to return to less of the commercial entertainment led news and more of the serious current affairs stuff and so the audience share tumbles. The owner of the media conglomerate that ACN is the news division of, Diana Lancing (Jane Fonda), goes against the shareholders and agrees with the news policy, regardless of the dip in audience share, bow tie wearing Station Manager and old friend Charlie Skinner (Sam Waterson) getting her full backing.

The show is produced by sassy and smart MacKenzie McHale (Emily Mortimer), who is engaged to Will. Assistant producer Don Keefer (Thomas Sadoski) is her number two and he is dating beautiful ACN business news presenter Sloan Sabbith (Olivia Munn). Chief investigative writer Jim Harper (John Gallagher Jr.) has a thing for cute and clever researcher Maggie Jordan (Alison Pill) and an incestuous newsroom to say the least.

A breaking story has shaken up the station. They have come into contact with some leaked highly sensitive secret government information and torn on when to release the story, involving a coup in a far off country that was encouraged by the CIA and a secret psy-ops policy that costs 38 people’s lives in a riot, including 3 Americans, killed by the military in a crackdown. 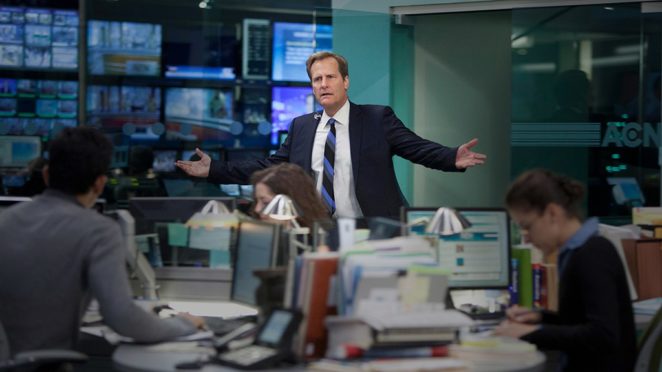 The FBI finds out about the leak and wants the source, using the Patriot Act to subpoena Will, who knows the source. But he won’t tell and so facing prison. CAN website techy Neal Sampat (Dev Patel), who broke the story, has already fled to Venezuela, fearing arrest for treason. In amongst that tension there is a hostile takeover brewing from a rival network, ACN station Chief Exec Reese Lansing (Chris Messina) under pressure to sell the news division to an obnoxious click bait digital internet billionaire as they slip lower down the rankings.

Even if The Newsroom served as a soapbox for creator Aaron Sorkin to stuff it to the right it remains entertaining throughout. I enjoyed it enough although three seasons was about right. There are no plans for anymore Newsroom. The clever way it uses real news and current events in the show as breaking news and report them thereafter (this season the Boston marathon bomb) adds that extra intelligence to it and, of course, a great way for Sorkin and his writers to attack its targets, even though this show ran when Obama was in power. I suspect a new season with Trump as the target would really raise the ire of the right. That would be unfair. Having Will’s character play a Republican Party member allowed those surprise attacks on the right.

The broadsheet printed press went after Sorkin and his show after season one aired as they didn’t like smug liberal TV people’s opinions on the news media. They said it was too romantic a view and unrealistic. ‘We are not that moral and a bitter lot living in fear of being fired every day’, as one NY Times chap put it, and as the print media shrinks and shrinks there is certainly no time for dating and attending swanky parties with beautiful media women in black figure hugging dresses wrapped around intelligent liberal cute guys.

Casting Jeff Daniels as a Republican being converted by the left leaning TV media was all too much for some and the right did not want to watch a show they naively thought may share their opinions on some things. In the United Kingdom TV just does not do center right news and so a natural liberal bias here. If a newsreader here showed a Brexit bias on air they would be quietly suspended or fired soon after for being a racist but if they joke about Brexiteers from a remain stance they would not be fired or censured. People in the TV media here with a center right opinion just keep quiet and so a natural left wing bias occurs. Not even a TV drama is allowed to end with the right on top. In America, of course, you have the right wing of the Fox media group to balance things out some and so more democratic there.

The show is funny, smart, sexy and rapid. As with most Sorkin shows he doesn’t get the actors to explain the smarter parts of plot to you with his signature to-and-throw ‘quippy’ lines. If you don’t catch up with it then you are left behind although this show is not as challenging as The West Wing that way..