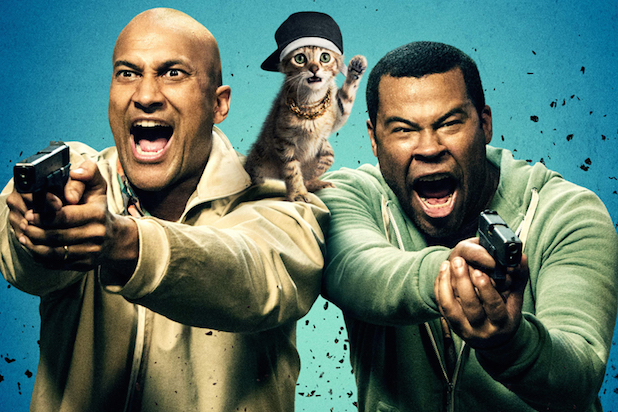 Before Jordan Peele wrote and directed the rather clever and Oscar nominated ‘Get Out’ he wrote and starred in the not so clever and s not Oscar nominated Keanu. Warning lights always go off with these all black cast comedies as they are generally aimed at date night crowds and the movies full of brash women called Shanica and players called Devron having relationship problems, hanging around in the barber shop and the joke pretty basic around misogyny and talking black. So when this got 78% on Rottentomatoes.com I thought maybe this wasn’t one of those and a little bit more to it so gave it a go. Not to be.

People say not enough black cast movies are made and reveled in Black Panther as being an example of what can be achieved if black filmmakers were allowed to make their own huge budget empowering films. But Black Panther ended up just another big budget superhero film with black actors instead of white actors; the Hollywood hype getting it to the top of the charts. Black directors do make movies and not blocked to do anything. It’s just that they were making the wrong type of movies before Black Panther. Keanu is evidence of.

Smoke and Oil are fearsome and mysterious assassins known as the “Allentown Brothers”. They stroll into a cartel drug-processing facility downtown and wipe-out everyone, including the boss, King Diaz. The pair takes a liking to Diaz’s cute little kitten but distracted by the police arriving, the cat escaping.

In safe suburbia, geeky I.T analyst Rell (Jordan Peele) has just been dumped by his girlfriend and finds the very same cat on his doorstep meowing. Taking an immediate liking to it, in his sorrowful situation, names it Keanu, taking it in. Rell’s cousin Clarence (Keegan-Michael Key) comes over to cheer him up and also takes a liking to Keanu.

Two weeks later, with Clarence’s wife Hannah (Nia Long) and daughter out of town, Clarence is left alone to have some fun. Rell, who is much happier after taking care of Keanu, decides to take Clarence out to catch a movie to get him to loosen up a bit and be himself. Returning home from their male bonding trip they find Rell’s house has been trashed and Keanu is missing.

Rell taps up his next-door weed dealer friend Hulka (Will Forte) for any information on the breakin and Keanu’s location, eventually revealing local drugs gang the 17th St. Blips may have raided Rell’s house instead of his, a downtown strip club their hangout.  Rell and Clarence boldly decide to go visit in search of Keanu, where the two adopt a “gangsta” persona in order to infiltrate the gang, calling themselves “Tectonic” and “Shark Tank”.

There they encounter the feisty and fearsome Hi-C (Tiffany Haddish), who is not too impressed with their demeanor, but nonetheless takes them to gang’s leader Cheddar (Method Man) in the back room, who somehow gets the impression they are the Allentown Boys. But the boys are in luck as Cheddar has Keanu (having renamed him New Jack), and they boldly blag to get the cat back. Problem is Cheddar will only return the cat if they come along to sell a new drug called “Holy Sh*t” to the ghetto. They reluctantly agree. How long can the two family men keep this ridiculous ruse up? 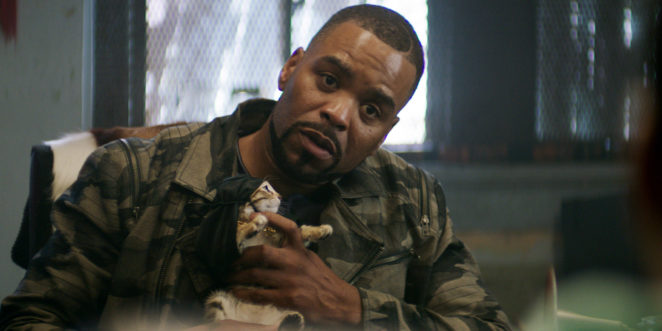 Black guys pretending to be white guys by sending them up as stiffs is nothing new, of course, but Peel tries to go that step further for bigger laughs. Problem is he fails with both and it all gets a rather silly premise after a while as the one joke resorts back to that black comedy cliché of jive talking machismo. I don’t know what it is but they seem to think that’s what black people want.

Now Keanu is cute though as seven different cats and kittens were used to play him, with each being rewarded with a case of Fancy Feast, an assortment of cat toys, which is even cuter. Sadly co-star Keegan-Michael Key is allergic to cats and had to take a medication in order to work with them. That should have been a hint the film may not work.

It cost $15 million to make and did $20m back, not bad for a first time director for a comedy. The two leads have been on TV a lot and did the Key and Peele Show in 2012 and onwards. Their chemistry is their chemistry but it doesn’t really make the movie work. Harold & Kumar did the same thing a while ago and that did work and made for two fun stoner movies but this just plodded along until it all got too OTT and I was ready for it to finish. Even the celebrity cameos didn’t work. That was also misjudged. The whole thing just reinforced stereotypes about Black Americans, what I thought it was not going to do, what ‘Get Out’ so didn’t do. I guess we couldn’t have had that one without this one.