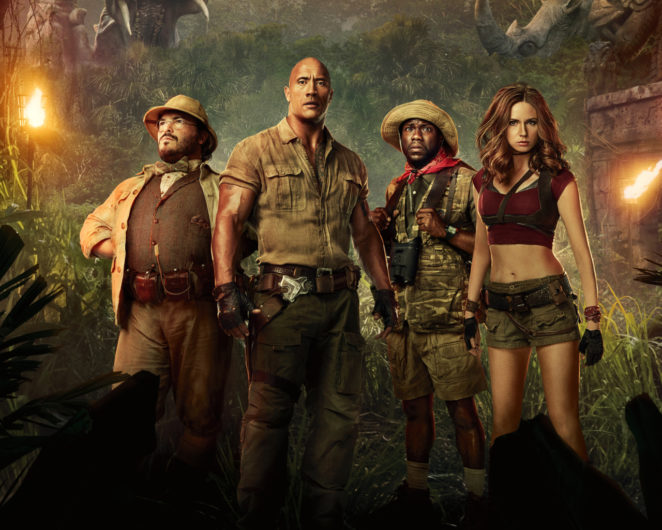 I remember being pleasantly surprised by the original kid’s movie Jumanji back in 1996 and although not a massive Robin Williams fan he made that movie from what was a very good idea for a movie. It was on the cusp of new digital effects and they nailed it. Robin has passed, of course, and a surprise it took 21 years for the sequel of sorts. I think the studio are also regretting that decision to leave it so long as Jumanji 2 has done a mind boggling £950 million dollars to date from its $150 million budget, Star Wars money. It made star Dwayne ‘The Rock’ Johnson the highest paid movie star last year. The original cost $65 and did $262 million.

Teenager Alex Vreeke (Nick Jonas) is given the Jumanji board game by his father, who found it on a beach. Disinterested, he puts the game on his bedside shelf and forgets about it. I mean who plays board games anymore? That night, while asleep the game transforms into a video game cartridge in a burst of weird green light, Alex awakened by the Jumanji drum beats that draws him to the box. When he begins playing, he disappears into the game.

20-years later four high school kids of different levels of cool, nerd Spencer (Alex Wolff), a jock called Fridge (Ser’Darius Blain), high school hottie Bethany (Madison Iseman) and introvert Martha (Morgan Turner) are on detention in the school storage area in the basement. With nothing to do but pick staples out of old magazines as punishment they discover the Jumanji game on one of the shelves and decide to play. After selecting their avatars and pressing ‘Play’ they are sucked into the game.

Disoriented they try to get their boundaries as they are soon attacked by hippos, Bethany eaten by a hippo ad then falling from the sky to return to the game. Three bars on their inside wrist show how many video game lives they have and Bethany just lost one. If they lose all three are they dead for real as panic sets in.

To put them at some ease they learn the game’s story from a man called Nigel (Ryhs Darby), who arrives in a Jurassic Park style SUV.  He informs them a corrupt archaeologist named Russel Van Pelt (Bobby Cannavale) has stolen the sacred Jaguar’s Eye, a magic green jewel, from its shrine, cursing Jumanji from now on. But Nigel escaped Van Pelt with the jewel and gives it to the players. If they can return it to a jaguar statue and call “Jumanji” they can lift the curse and return home. Nigel warns them that Van Pelt will stop at nothing to retrieve the jewel, which gives him control of Jumanji’s animals, and they have only three lives to complete the game.

Pretty good fun and an idea Christmas present for a family watch around that time. It’s inoffensive, occasionally funny, some good panoramas and action scenes and who doesn’t love The Rock. The incredibly annoying shortass Kevin Hart is actually quite bearable here and who doesn’t want to see Karen Gillen in tony shorts. I know the young boys watching this will enjoy that bit but can’t work out why yet. Jack Black is somewhat underused here as the fat bloke who is really a girl. It would have been nice to see the hilarious Rhys Darby get more lines.

The big action scenes are there and a general send up of those explorer movies is not unexpected with plenty of video game in-jokes for mom and dad. Ultimately The Rock is the highest paid actor because everyone loves him and, more importantly, he can turn any film into a Dwayne Johnson movie, Jurassic Park meets Indian Jones never not likely to be a hit. As I say it’s good fun and nicely paced and no doubt the sequel already in production to cash in on that $960 million of family fun bucks.