There is no doubt social media is changing younger people’s psyche for the worse. The pressure is on to be perfect and sometimes it’s cruel. In the pubs you see the group of girls and then the pretty one demands a selfie of all the girls. She is control of the photo and doing it to reassure herself she is indeed the prettiest, rather than a photo to remember a good night. Often the plain or the fat girl in the group is positioned either side of her to make her look prettier still. Then the pics are posted up on Facebook and all her friends have to see how ghastly they look. I hate having a selfie done. When do we actually like a photo taken of us? Only the photogenic people do. Social media is their time.

Ingrid Goes West is a dark comedy around that need for certain people to present their lives as perfect online and use all the tricks in the book to achieve that, like photoshop and pretending to be at lots of social events and places to unwittingly make your friends feel inferior. I think we all know a person like that. But if the person believing that life is real they can get depressed for not having that life that may or may not be as it seems. The film stars Elizabeth Olsen, the older sister of child star twins Mary-Kate and Ashley Olsen, three sisters who have grown up in that world.

Ingrid Thorburn (Aubrey Plaxa) is an unstable young woman who lives alone in a small town in Pennsylvania. She doesn’t have any real friends but picks them off Facebook and social media, building an online friendship and then tries to join in physically in their real lives. We know how well that is not going during the opening scene of the film as she gatecrashes the wedding of her Instagram friend Charlotte (Meredith Hagner), who has not invited her to that wedding, Ingrid ‘pepper spraying’ the bride in a jealous rage, resulting in a short stay in a mental hospital.

Released, Ingrid is soon back on social media looking for new friends, settling for L.A social media influencer Taylor Sloane (Elizabeth Olsen), who she also sees in a Vogue article. Smitten by her seemingly perfect life, Ingrid comments to her online are soon reciprocated in a polite manner from Sloane, the trigger for Ingrid to head West to California to try and weave herself into her life. With an inheritance of $60,000 from her dead mother she has the funds to live that fantasy for a bit, renting an apartment in Venice Beach from landlord Dan (O’Shea Jackson Jr.), an aspiring screenwriter and big Batman fan. 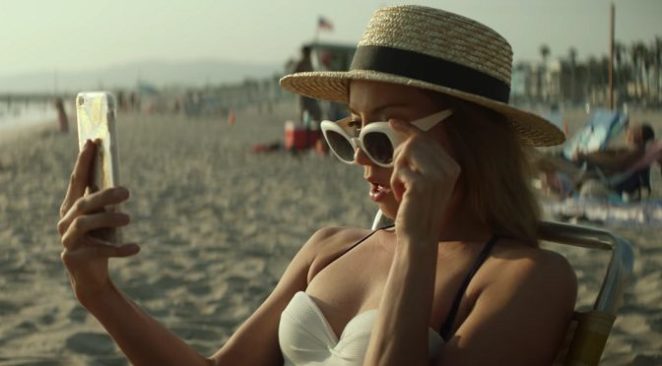 Ingrid sets about visiting Taylor’s regular hangouts and restaurants in the hope to run into her to force an introduction, even dressing like her, running into Taylor at a book store she promotes online. Ingrid follows her to find out where she lives and then kidnaps her dog, ingratiating herself to Taylor by returning it to her and her husband Ezra (Wyatt Russell) when the ‘missing dog’ flyers go out. An offer to stay for diner is her reward for finding the dog and the three are soon getting on like a house on fire.

The following day, Ingrid begs Dan for the use of his truck to help Taylor move some gear to her home in Joshua Tree, Ingrid promising to return it to him that evening but doesn’t as the girls stay out late and party and on the way home, Ingrid smashing the fender while driving under the influence. Dan is not best pleased and ready to chuck her out as he missed an audition because of. Ingrid’s behavior becomes even more irritable on the arrival of Sloane’s arrogant brother Nicky (Billy Magnussen), who soon has his suspicions about Ingrid and threatens her deception.

Although a comedy it’s not that funny, if for the subject matter. A lot of young women are deeply affected by social media and a worrying number cut themselves and all sorts through depression and anxiety around social media and the expectation to look and be the best. Because of that subject matter it is very much a film aimed at women as it’s what they are going through. The chubby school girl that wears the black Anthrax T-Shirt is not having a great time of it right now.

A $3.2m return didn’t set the box office on fire with solid reviews and word of mouth getting it out there. It’s an interesting piece and handles its contemporary issue well. The acting is good and Aubrey Plaza (seemingly named after a shopping mall) particularly good as the unstable Ingrid. It’s probably the first film I have really seen make fun at social media’s self importance and done in a grown up way.

I enjoyed it enough to recommend it and I think it will appeal to those who have it listed on their movie package and want to watch something adult funny over the silly. American teen comedies tend to be dreadful in the mainstream. Where it slightly lets itself down is it doesn’t go darker still.