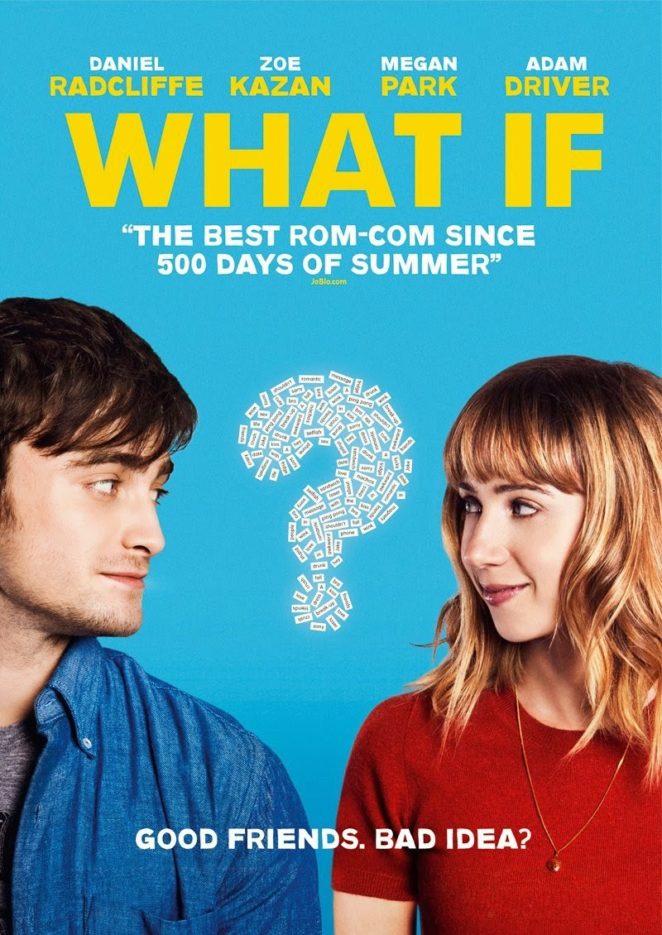 What if Harry Potter grew up to be tall and handsome? Well he didn’t and so difficult to cast Daniel Radcliffe in movies now. It’s a big problem for child stars, the ambitiously clever – but rather boring – Oscar winning movie Boyhood, following the life of actor Ellar Coltrane from baby to adult, a great example of. The cute baby turned out to be an ugly teenager and somewhat soured the film. Look at the mess McCauley Culkin morphed into! Ellar’s latest bit part is the in the B Movie ‘The Man Who Killed Hitler and Then The Bigfoot’. Radcliffe is not quite there yet but won’t be long.

Radcliffe has taken some edgy roles of late to shake of Harry and never really convinced, his turn as a 5ft 5 undercover FBI agent in Imperium almost laughable. Horns and Kill Your Darlings were certainly different and now we have What If, dipping his toes in the Rom Com world. The film was originally called ‘The F Word’ but the producers thought would send mixed messages and so we have What If, Danny almost playing the romantic lead. He is no Mathew McConaughey.

Geeky middle-class English boy abroad Wallace (Daniel Radcliffe) is drifting a bit after college and lives with his sister and nephew in Toronto, Ontario. He dropped out of med school after catching his bird having sex with his anatomy teacher and has not been very interested in much since.

He is dragged by his best friend Allan (Adam Driver) to a house party, where he meets Allan’s cooky cousin Chantry (Zoe Kazan) who works as an animator in the city. At the same party, Allan meets leggy Nicole (Mackenzie Davis) and its lust at first vodka.

Chantry and Wallace seem to spark as he walks her home where he finds out that Chantry has a boyfriend. Even so, as a liberated Canadian, she gives him her phone number, but he decides against calling her too quickly. In the same week they bump into each other at the movies, where they had both gone alone, and end up having dinner together. They agree to be friends to keep things simple.

The friendship grows and Wallace is eventually invited to meet Ben (Rafe Spall) at her home, Chantry’s long-term boyfriend, who works for the UN as a lawyer. Somehow Ben falls out the window and soon at the hospital; Wallace and Chantry run into Wallace’s ex-girlfriend, Megan (Rebecca Northan), somewhat awkward.

Ben, putting career first, later moves to Dublin, Ireland for six months due to his job. then , Wallace and Chantry will become closer and they begin to have deeper feelings for each other. But can good friends be lovers?

I enjoyed this to a point but that point was a blunt pencil. Daniel Radcliffe is not a Rom- Com guy. Maybe Richard Curtiss could make it work but not for me. It’s one of those Rom-Coms where nobody seems to work and so plenty of time for coffee shops, loft apartments and whimsical walks in the park and all the money in the world to enjoy that. I was expecting Mathew Perry to walk around the corner at any moment.

There is not actually much romance in this as the lead girl contemplates her perfect life is anything but and Radcliffe strains to be remotely attractive and appealing on screen. At 5ft 5 you can pair him up with most pretty actresses but the gigantic Adam Driver next to him makes little sense as the alpha male.

It did $11 million from its $7.8 million budget and clearly not what mainstream audiences want from a Rom Com, very much the Harry Potter fans that grew up with Daniel being the ones most likely to see this. The ending is predictable as the cheesy cool soundtrack and a film that almost created its own genre in the way Ricky Gervais films do. How do you make a talented actor work in a romantic movie when he is not remotely cute, tall of charismatic?