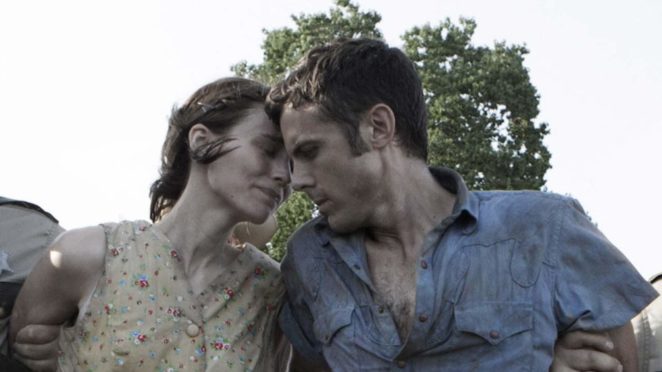 So ‘Aint Those Bodies Saints’, starring Casey Affleck, one of modern cinemas finest actors. This is not one of his finest films though. He is one of those actors, who can make average movies and scripts somewhat more watchable to the general public, the case here. It also stars the likewise talent of Rooney Mara, a good match up.

This is a loose homage to the film Bonnie & Clyde and from director David Lowery, he of

A Ghost Story (2017) and Petes Dragon (2015). It cost just $4 million to make but bombed at just $1 million in takings at the cinema. The multiplex going public is losing patience with low budget quality dramas, it seems.

Its 1950s America and pretty twentysomething Ruth Guthrie (Rooney Mara) is walking across a field ahead of her man, Bob Muldoon (Casey Affleck), a lovers tiff settled by the news Ruth is pregnant by him, and they reconcile.

Bob and best buddy Freddy (Kentucker Audley) commit crime for a loving with Ruth driving the getaway car. The police, including Office Wheeler (Ben Foster) pursues them with sirens blazing. A gunfight at an old house ensues there with Freddy shot dead by the cops and Ruth shooting Patrick Wheeler in the shoulder. The couple surrenders and Bob takes the fall for shooting Patrick so Ruth can avoid jail. Bob is jailed for a very long time. Ruth tells Skerrit (Keith Carradine), Freddy’s father, that she is going to wait for Bob, Skerrit not happy.. Bob writes letters from jail, promising Ruth to be back with her and their child one day. Ruth gives birth to their daughter, Sylvie (Kennadie Smith), not thinking about that down the line.

As the years roll on Ruth and Sylvie live a regular life in the small town of Meridian, Texas. Patrick, still unaware it was Ruth that actually shot him, spots Ruth and Sylvie around town, but Ruth avoiding any contact with him. Then one day, Patrick makes a visit to Ruth’s residence and tells her that Bob has escaped from prison, on his fifth attempt. The local detective questions Ruth as to whether Bob has been in contact, Ruth telling him the truth she doesn’t expect Bob back in her life. Meanwhile, Bob is scrambling across Missouri to escape the authorities. But makes it to Texas and looks up his trusted friend Sweetie (Nate Parker) for help, who obliges but the cops on his tail.

News of Muldoon’s breakout has spread, three bounty hunters, led by an individual called Bear (Charles Baker), pay a visit to Skerrit’s hardware store to find out if their man is in town. Meanwhile Patrick visits Ruth to return her letters the police looked over to help track him down and suggest she skip town until this all blows over, the two much closer than they were.

This is not a film that will stay with you for long, as few are these days. It’s OK and another strong performance by Affleck where as it’s a breeze for Mara playing the single mom alongside. Chemistry is light. It’s not really a western or a drama and very much all about the mood piece acting by Affleck. That’s not really enough for me these days to enjoy a movie. It’s not exactly action packed stuff. As well scripted as it is that Casey Affleck thing of James Dean pathos is the movie and he is a contender.

It’s not slow and keeps moving forward to keep you interested considering the subject matter and the insertion of the bounty hunters adds some tightness to it as it moves towards its inevitable ending of a second shootout and his redemption. To be fair it’s not really a romantic drama either on that score.

It’s one to watch for Affleck fans if it was to pop up on regular TV and always an interesting actor on screen. It’s not a must see movie though and more of a critics’ darling than the Shawshank Redemption. Robert Redford and co did this a whole lot better in the 1970s.