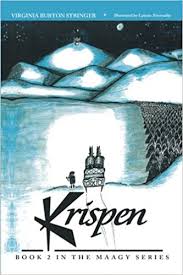 The circuitous route that Crown Princess Melania Abigail Alice Grace, known as Maagy, must take to progress from her childlike state of self-indulgence to one where she has the fine qualities of a leader lies at the core of the Maagy series. Krispen, as the second story in the Maagy series, portrays her as having made some progress from her original state, as headstrong, over-indulged and temperamental. On her journey to becoming fit to be a queen, she has gone some way to becoming kind, patient, humble and resourceful. However, she still requires her focus of attention to be more on what others expect from her, and less on her own frailties and vulnerabilities. In short, she needs to toughen up, and this is done in the pages of Krispen by her being propelled into action by external forces and demands that place her in a position that is most definitely outside her comfort zone.

At the beginning of Krispen, while struggling hard to fit in with her peer group, she is exposed to ridicule and shame, because she believes in Father Kringle when no one else around her seems to do so. When the true nature of the Santa Clause-ish type figure is revealed to her, she is, however, not only affirmed in her belief, and strengthened in her innate awareness of the ethically and morally right thing to do, but she is also able to start to grasp the very essence of her own humanity. How she takes her future into her own hands, and starts to emerge as an enterprising and heroic soul, should make for worthwhile reading for any post-tween who is starting to make her own way through the world.

As Virginia Burton Stringer, critically acclaimed playwright and author, states, she has modelled the central character of Maagy on that of her own daughters and granddaughters—in short, “Maagy is an amalgamation of all four girls, with her temper tantrums and impetuousness, but also, with a tender heart and sense of justice.” In addition, the characters of Grandpa Kris and Grandma Polly are based on those of her own grandparents, Robert S. Burton, Sr. and Bertha Miller Burton. The affection and warmth that imbue her lead personae no doubt comes from the close familiarity that she has with the depth and meaningfulness of the relationships that she has with these figures in real life. So, whereas with conventional fairy tales, oftentimes those peopling their narration can be seen as two-dimensional and representative of ideas rather than as fully fleshed creatures with a unique identity of their own, the individuals who are described in the Maagy series have a truth and a universality that stretch far beyond the pages of any one text.

For any adolescent girl who is struggling to establish her own identity in the face of what sometimes might feel like overwhelming odds, Krispen could prove to be at least part of the key. The additional glossary of characters in Maagy’s world, its explanation of advanced words and terms, and its explanation of the Huggermugger language all attest to how much thought and consideration has gone into making this text a suitable reader for the particular age group at which it is targeted. All in all, an interesting and thought-provoking read for any newly adolescent girl, Krispen is well worth the time that it takes to read, though the first book in the series, entitled Just Maagy, should first be read, as there are many allusions to the earlier text in the later one.