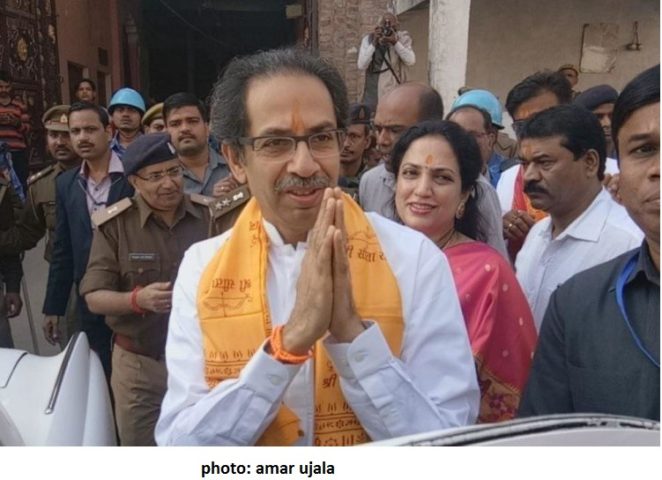 On Sunday, after going from Ayodhya, Shiv Sena chief Uddhav Thakre was given a strong admonition to the BJP. Thackeray said that if the case of Ram temple is to knock  the door of  court then do not use it during the elections. Also, apologizing to the public, let us know that the promise of building a Ram temple was also a paradigm.

He said that BJP should not fight with the sentiments of Hindus, I have just come here to say this.

Taking the CM Yogi on target, Uddhav said that I had heard the CM Yogi many times saying that the temple was, and will remain. This is our perception, our sense is. But the sadness is that it is not visible.

Uddhav Thackeray thanked the guests of Ayodhya for the guests . And said that he did not have any hidden agenda behind coming here.

He said,” I came here to express only those emotions which are inside the Hindus of the country and around the world for the sake of Ram temple”.

After this, Uddhav Thackeray left for Mumbai with his family by private plane. A group of Shiv Sainiks who accompanied them had left on Saturday, while the Shiv Sainiks( members of shiv sena party) who came from the train will also be leaving by this evening.

Significantly, the BJP government has been referring to the decision of the Supreme Court on the construction of Ram Temple. From the Chief Minister Yogi, all the BJP leaders are seen to have avoided speaking anything clearly on this issue.

After the displeasure of saints in Ayodhya, the CM promised to build a grand statue of Shri Ram on the side of Saryu. After returning from Madhya Pradesh on Saturday , the CM Yogi gave an order to start further proceedings, granting one of the five models of the proposed 221 meter high shriram idol.