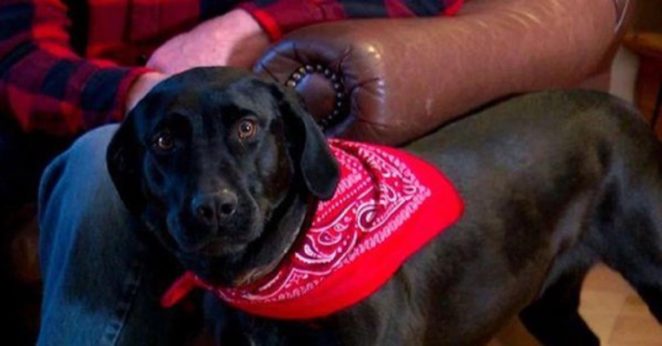 If there is one good thing of having a dog that is either a purebred or mixed race dog of either gender, it is when the owner of a dog can trust his or her gut feeling when a dog tries to tell the owner “Something wrong is going on near our home. I need to check it out.”

Recently in Minnesota, Tim Curfman’s pet female mixed Black Labrador Retriever named Midnight who was likely given that name due to her dark coat, managed to alert her owner that someone rear by was in trouble since according to Tim, Midnight’s body language indicated that she was needed to assist someone.

Tim decided to trust what his dog was telling him that someone needed their help. Both Tim and Midnight then went outside their home with Midnight leading Tim to the back side of their home walking in the snow where they saw their neighbor Doreen who is a senior citizen of 87 years of age in trouble as she fell down to the snow covered floor after she attempted to fix a birdcage.

Tim was able to pick up Noreen from the snow covered sidewalk since Noreen did not have object that she could grab to assist her get back on her feet.

Tim took in Noreen inside his home so he and his wife were able to get her some warm clothing and get her quick drink and meal before she went back to her home.

Had Tim and Midnight not been able to assist Noreen when she was on the sidewalk floor that was covered in snow, Noreen could have perished due to the extreme cold weather.

Midnight is being praised as a modern day hero dog.