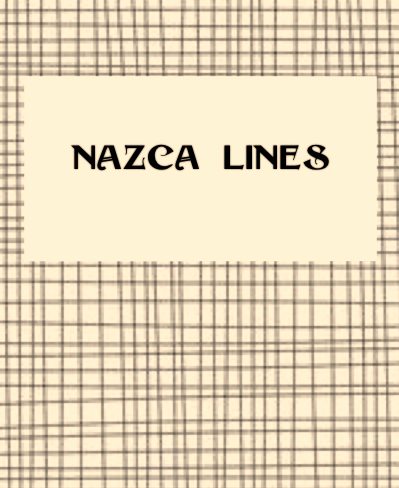 Theories are created from a few known facts and a boat load of presumption, supposition, and assumption about a particular subject. Sometimes theories prove useful and even to pan out.

Yet, when we hear the word theory our antennas should go up. We need to be careful to fact check rather than heed those trying to prove their theories with high sounding but unfounded speculation as their proof.

Science is supposed to be fact based, but today we see infighting among researchers wanting to make a name for themselves and outright deception from those who want to gain power over people groups. Attacks on valid science stun, leaving tenable researchers shaking their heads.

So, what does all this have to do with an obscure Peruvian geographical location? Nazcas created a massive geoglyphic site, leaving us something to remember them by.

The problem is that at this point the geoglyphs only add questions to what little we do know about these people. Theories abound but It’s not difficult to see that the site reflects at least some aspects of their religious practice.

However, there are extremely valid reasons not to believe Nazcas were in contact with aliens. Listening to some of the convincingly presented theories tends to aggravate anyone looking for principled scientific proofs on such matters.

This quiz, though, dismisses the theories. It is designed to check our actual knowledge about these people and their geoglyphics. Have fun and let us know what you learned in the comments below.