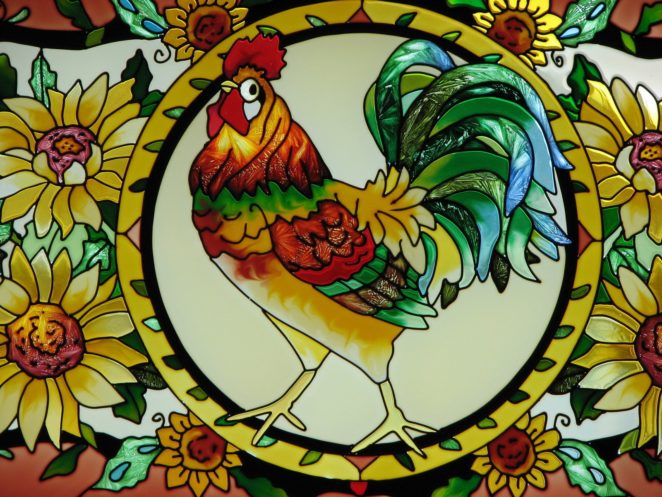 This stained-glass depiction of the Biblical “Rooster” and denial, seemed a fitting accompaniment to my article, also, my dearest wife, is a serious collector of all things, “chicken” and I wanted to flirt with her in public, so, there!

The next time, you feel the need to criticize or cuss a few democratically nonappointive American leader’s apparent maladroitness, a view, presumably inclined by a scarcity of information, or have a difference of opinion with another citizen’, instead of reasoning, with him, or her, remember the story concerning an explicit brave Lawyer from Baltimore once, whose name was Francis Scott Key, yes, he was in all probability not known as Frank Key and no disrespect implied, hence my article, honoring his courageous act, well, he was the person who wrote a song that I’m certain you’re all familiar with.

If you’re an American national, you’ve positively heard it and even sang it dozens of times. it’s in all Christian churches. It’s known as the American anthem, it’s  the one you sing at all  rallies and sports events, and even when you attend public gatherings and you most certainly sing the words of that song and the words float over your minds and over your lips and, ofttimes, sadly, it would seem, several of you don’t even grasp what a bright beacon of sunshine, your, anthem and flag is to outsiders like us.

Several of you have memorized The Star-Spangled Banner as a child.  However, have you ever thought deeply, about what those solemn words mean, and under what dire circumstances they were once written? maybe you ought to hear the true story of  Francis Scott Key, the brave Lawyer from Baltimore who lived at a time when the colonies were engaged in vicious conflict with the English…