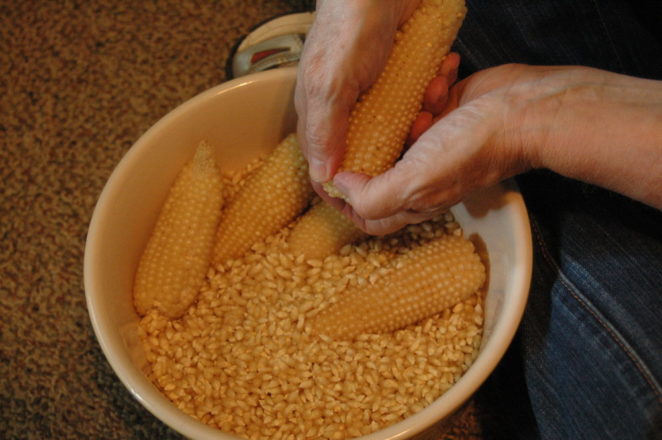 I suppose I didn’t really create this, but if you read my story, you may just see a smidgen of creativity in the entire construct somewhere. As an 8 years old kid, I had a despicable addiction! I craved popcorn, the mere mention of the word would have me salivating. While I still love those mildly crunchy, fluffy white balls, decades later, I finally realized that at least back then, I must have had a gross, Zinc deficiency.

We were strangely, always out of popcorn kernels!

One day I grabbed an entire cupful and headed down to the furthermost part of our garden, so, armed with a teaspoon, I went down on all-fours and commenced digging tiny 20mm deep holes into which, I placed a single kernel, each of golden-yellow popcorn.

Knees raw and a dozen rows of weird minute mound-lets trailing off behind me, My first ever planting experience,  completed, I returned home, had a quick washup and no one was any the wiser.

From that day on, I would sneak out for half an hour with my toy plastic watering can, sprinkling just a few drops onto each mound-let. Naturally, at the onset,  I didn’t know about sprinkling a very few carefully placed drops, no, not at all, this only happened after splashing a mini-Tsunami onto the first dozen kernels.

Within weeks, germination miraculously happened as, during the night, dozens of tiny pointy shoots started appearing and it was around this time, that my brother decided to follow me to my “secret” garden. He wanted to know why it was a secret and I told him that I had asked our mom for some popcorn kernels and she said it would be wasteful trying to plant them as GMO stuff don’t germinate, (Yep, even back then), and that I must stick to “normal” kids stuff.

We had a few good showers of rain that year and in no time my popcorn patch was looking less like a patch and more like a serious crop of corn. Every stalk had 4 to 5 small heads of corn. But for some reason, unlike in the pictures in National Geographic, my corn seemed stinted, somehow. I decided to show my geography teacher a sample. She peeled away the leaves and said that this was not an ordinary head of corn which is nearly 3 times larger and that this was popcorn and by the looks of it, they were ready for drying.

She explained hat corn dries best on the stalk and should be harvested in another 3 weeks. Harvest time came and what a bumper crop it was, Then the big day came to pop some. There was no problem as they all popped perfectly. We had several jars of kernels which lasted us for months.

A takeaway tip, I found, that when I pop them in a little coconut oil and in a shallow skillet with a lid, as opposed to a pot, works best for me. Just pour in enough kernels to cover 1/2 of the bottom. Start on full heat till the first few pops are heard then quickly turn the heat right down leaving the skillet on the stove till popping stops and remove.