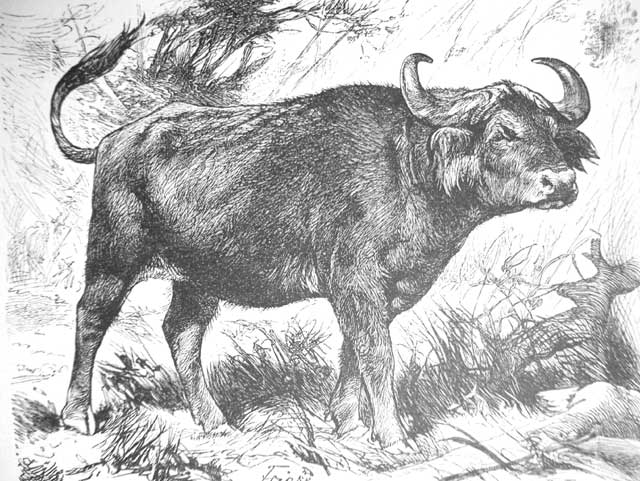 I have never seen a buffalo.  Not even at a zoo.  For most of my entire life I’ve only ever heard buffalo mentioned in 3 contexts.

Native Americans ate buffalo for food. But the white man killed the animals for sport, thus depleting the food supply for the Indians.

When crowds go insane and rush into a stadium or a Walmart, they are referred to as a “herd of stampeding buffaloes”.

There is an imaginary “purple buffalo” which is an integral part of the storyline for The Neverending Story.  Great family entertainment. I prefer the movie, but there is also an animated TV series.

Thanks to a blogger from Botswana, a 4th context has been added to my knowledge base.

There are buffaloes in Africa and they are a part of Botswana’s Big Five.

In today’s Late Pleistocene scene, giant African buffalo & quagga-colored zebras hang out in s. Africa. The buffalo may have weighed up to 4,400 lbs (2,000 kg)! The zebra's unusual coloration was once common but hasn’t been seen in the wild for the past 150 yrs. #MegafaunaMonday pic.twitter.com/rzW65eI8Zs

African buffalo is large animal that can reach 6.8 to 11 feet in length, 3.2 to 5.6 feet in height and weight between 660 and 1900 pounds. African buffalo has large head, broad chest and strong legs. It is four times stronger than ox. pic.twitter.com/jqiwLFpsK4