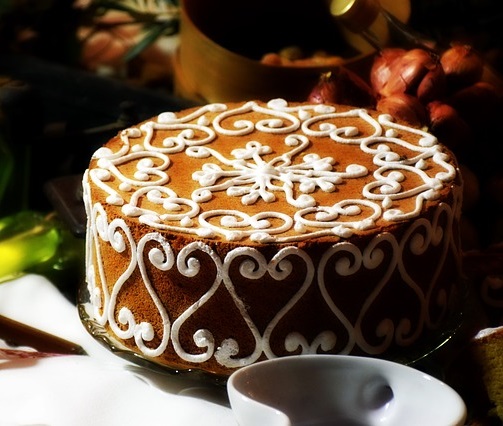 In America, we have Martha Stewart, who is without a doubt the richest and most famous housekeeper/homemaker in the world.  (Or so I thought.  Until one of my friends from another part of the world told me that he had never heard of her.  LOL.)  This woman took the mundane chores of housekeeping, homemaking, cooking, and cleaning, and turned it into a multimillion-dollar enterprise.  In 2011, Forbes Magazine reported this lady’s net worth at $638 million.  By 2017, it had reached $970 million.  Holler!

When it comes to preparing meals, especially for significant holidays, I like to watch her cooking shows, in the hope that I will learn something new and different in order to impress family and friends with my culinary skills.

One time, several years back on one of Ms. Stewart’s TV shows, she baked a whole turkey and wrapped it in a pie crust!  The crust had decorative leaves.  Who does that??!!

She has a program called Martha Bakes where she explores the wonderful world of baking and teaches her viewers how to create all kinds of marvelous baked treats, especially cakes.  She insists that baking a cake from scratch is not difficult.  Why would anyone bother with a cake mix?

Don’t know about you, but since I’ve have been using cake mixes my entire life and have made some pretty sweet cakes if I do say so myself, those sound like Throw Down! words to me.

I know Martha Stewart is the diva of homemaking and nobody should dare challenge this domestic goddess; especially not when she’s speaking to you directly from her own kitchen.

I know cakes made from scratch are a food of love and they are the result of your willingness to take your precious time to create something special for your loved ones to eat and enjoy; a delightful dessert that they will always fondly remember.

But cake mixes are real cakes!  Boxed cake mixes are just as good as cakes made from scratch.  And let’s be real.  If your family and friends are like my family and friends, they probably wouldn’t even notice the difference between a cake made with a box cake mix versus a cake made from scratch.  They’ll probably wolf down 2 or 3 slices and ask if they can take a piece home for later!  LOL.