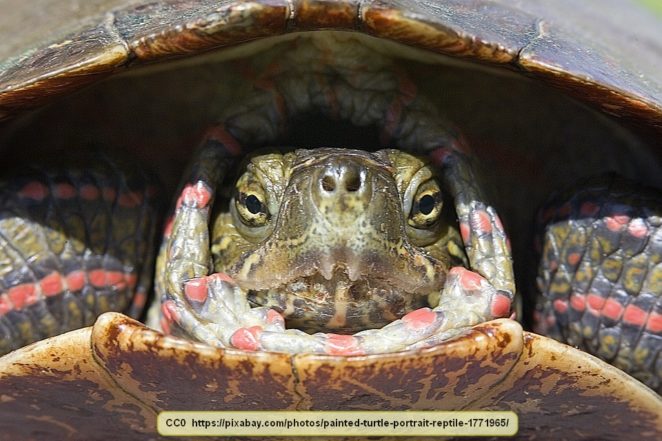 Locally, we have an event that is held every year at a time that marks a weekend of celebration for our small town. There are a number of events, actually; a parade, barbecue, rodeo events, and so forth. This year, it was held during the first week in June and the celebration has nothing to do with our county fair, which is also held here. However, one event is a little unusual and a lot of people have a great deal of fun doing it; turtle races.

There are a lot of lakes, ponds, sloughs, and similar bodies of water in Montana. Most of these have a resident population of turtles. These are primarily painted turtles (Chrysemys picta). Painted turtles are common throughout the northern US and southern Canada, from coast to coast. In the east, they are found as far south as the Carolinas.

We also have an introduced species of turtles; pond sliders, but these don’t take part in the races. They are also a non-native species, though they look a lot like painted turtles. Also, note that hares aren’t allowed to enter these races. I have a pet pond slider, aka red-eared turtle, that I’ve had for about 11 years now.

For the race, people go out to area ponds and catch painted turtles. They are then taken to the fairgrounds where a ‘turtle race course’ is set up. The turtles are handled carefully, but they are raced against each other. The prizes are minor and the event is done simply for fun. After the races are over, the turtles are taken back to the ponds of origin and are turned loose, none the worse for wear.

I have no idea when the turtle races originated or why, but it is a yearly event. It also wouldn’t be possible if it wasn’t for the fact that there are a lot of turtles around here. A lot of effort also goes into making sure that the turtles aren’t harmed and the races actually help the turtles because it raises awareness so that during other times of the year when people see turtles, they leave them alone.

Painted turtles are pretty and they do no damage. They eat both plants and animals, so they aren’t a threat to anyone.