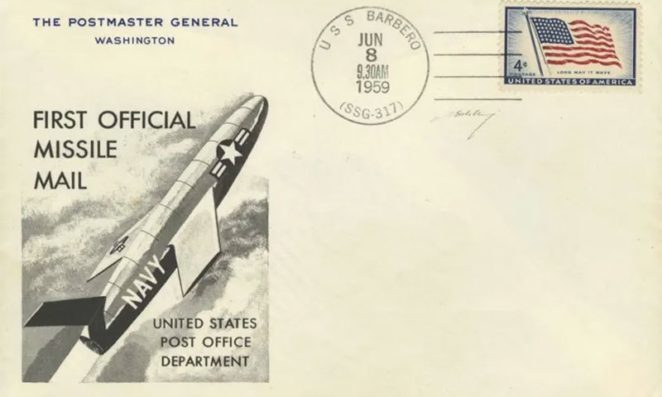 By the way, you may have never seen a letter coming to your house since this is the technology era and we use email service, but still in most places in United states, it is the people who deliver the letters.

But would you believe that  United States resorted to missiles instead of aircraft or trains for the fastest delivery of letters a few decades ago? Yes indeed in the 1950s when space races and missiles began to operate during the US and Russia. So the US government did not consider this technology to be limited to the military, but it was also considered the fastest way to deliver letters.

Believe it ,The US Postal Services Company did its best to send the mail via missile mail, but also get success to some degree.  In June 1959 ,The US Navy sent successfully 3,000 letters from a USS submarine USS Barbero, a guided missile to the Naval Air Station located in Mayport, Florida, a hundred miles off the US coast.

The 36-foot missile fired the submarine from the submarine to the Naval base which reached in just 22 minute and the letters were placed in 2 metal boxes in the warhead chamber of the missile.

These letters also had the usual stamps on the left, and also the first official mail. The Postal Services also expressed happiness over the successful delivery of letters through missiles, because earlier this institution had tried several similar methods for faster delivery and never succeeded.

By the way, the word ‘delivery’ was exaggerated in the delivery of the letters through the missiles as most of the letters went to a post office and were routinely delivered to the people, because it was not possible to accommodate 3,000 people in the Naval Base for these posts for collection.

Postmaster General of that time , Mr Arthur Summerfield said, now that we know we can do this, we will discuss how and under what conditions this process will be implemented. But that could never be implemented because Arthur Field’s successor J. Edward Day concluded the program, saying that most of the messages sent by the missile took 8 days to reach the desired address and the delivery did not take place at rocket speed. ۔