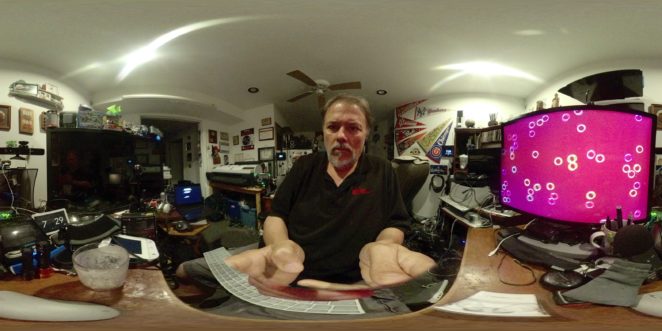 The insta360 Nano S camera is a great add-on for your phone. They have an iPhone and an Android version. The iPhone version has a lightning connector. The camera has memory, can be used as a stand-alone, or as an attached camera on the iPhone. The picture shared today with this review, comes from the camera. When taking a picture, the camera stores it onboard or if connected, directly to the iPhone. Interesting note, like most 360 cameras it doesn’t go directly into the picture library. You have to move the image from the Nanos library to the photo library of your phone. Normally a 360 image is also large, the picture shared is 13 meg on my phone.

The biggest part of 360 cameras is the software. I like the Nano software. It is easy to use, and you can easily switch between the imaging modes. Your options are 180 picture, or 180 videos or 360 picture or video. The quality of the video is impressive. The system also allows you to capture images and video in AR mode. Overall the software is solid. You have to stitch and render the 360 images (two cameras on the device) and the software does very well with that. Two other things that are very nice in regards to the software is the auto-launch when you plug in the device to your phone. That is a nice feature that wasn’t always available in iPhones.

There is also a stand-alone batter in the unit, so it doesn’t suck your phone’s battery.

The other thing that I find useful (beyond the snug fit and therefore no issue with it coming off the phone) is the ability to operate the device right side up for the device, which is upside down for the phone. Finally, because the unit has a USB-C, Lightning or USB connector you don’t have to pair the device with your phone. That makes setup incredibly easy.