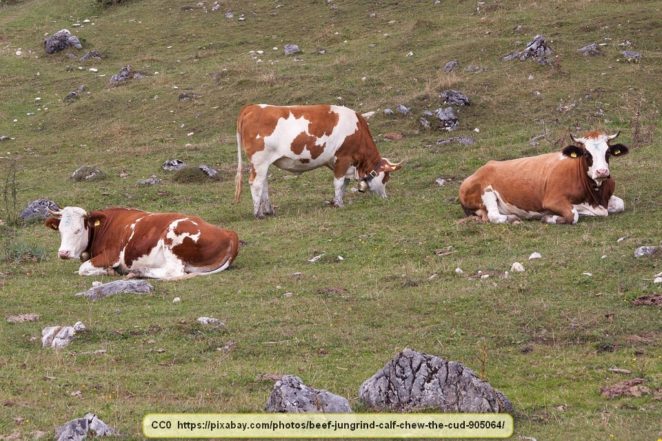 Sometimes people equate an act of kindness as a sort of violence. Naturally, each person must make up their own mind about that, however, this is the case of sticking cattle.

I’m sure that a lot of people who’ve never been around cattle have very little idea of what it means to stick a cow, steer, or bull. I believe that I’ve mentioned the procedure before, but just as a recap and explanation, cattle are ruminants. That is, they “chew the cud”.

Once they finish the chewing of the cud, it is swallowed and it passes into the second chamber of the stomach, where digestion begins.

Normally, the cattle need no help for humans for any of this to happen. It is entirely natural to ruminants; cattle, deer, goats, and so forth.

However, once in a while, the cattle get into dense, nutrient-rich, green, wet food. For instance, they might get into a field of growing alfalfa. A densely growing field of alfalfa doesn’t occur in nature, so normally this situation wouldn’t occur, but farmers sometimes grow alfalfa so it can become hay that can be fed to livestock later. Hay isn’t nearly as rich, once it has been cut and dried.

Now, cattle aren’t very intelligent animals. If they find themselves in a field of growing alfalfa, they will gorge themselves on the alfalfa until they can’t eat more. All of this material is passed into the first chamber of the stomach. Because of the temperature, moisture, bacteria, and contents, the material begins to quickly ferment, producing carbon dioxide and methane.

The first chamber of the stomach can only hold just so much and since it is already filled with plant material, the gas causes it to expand. This is a life-threatening situation. If that chamber bursts, like an over-filled balloon, it is likely that the animal will die. The cow is also in considerable pain, just as you are if you have a severe gas attack.

The solution is to “stick” the cow. This amounts to puncturing the first chamber of the stomach to release the trapped gas. As mean as this may sound, it doesn’t hurt the animal and the puncture heals quickly. It also gives them relief from the severe pain.

The purpose and the procedure aren’t difficult to understand and the consequences of doing nothing are just as easy to grasp. Yet, some people see the act of puncturing the stomach as violence and cruelty to the animal. It doesn’t seem to matter that the alternative is for the animal to suffer tremendous pain before dying of bloating and a ruptured stomach.

To me, sticking a cow is being kind rather than being violent or cruel, but I suppose that it depends on how a person wants to define violence and cruelty. Another person, myself, for instance, could see it as violent and cruel not to stick the cow in this situation.