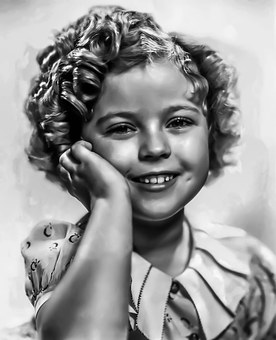 Shirley Temple was born on April 23, 1928.  She was an American actress, singer, dancer, businesswoman and diplomat.

Shirley began her film career in 1932 at the age of 3.  She was the #1 box-office draw as a child actress from 1935-1938.  In February, 1935, she received the Juvenile Academy Award for her outstanding contribution as a juvenile performer in motion pictures during 1934.  Some of her movies are:  Curly Top, Heidi and Bright Eyes.  Her licensed merchandise was very popular which included dolls, dishes and clothing.

She made 14 films from ages 14-21 and retired from movie-making in 1950 at the age of 22.  In the late 1950s to early 1960s she did some television roles and guest appearances.  She sat on the boards of corporations and organizations such as The Walt Disney Company, Del Monte Foods and The National Wildlife Federation.  In 1969 she began her diplomatic career as United States ambassador to Ghana and Czechoslovakia and also served as Chief of Protocol of the United States.

She is the recipient of numerous awards and honors, including Kennedy Center Honors and the Screen Actors Guild Life Achievement Award.  She placed #18 on the American Film Institute’s list of the greatest female American screen legends of Classic Hollywood cinema.