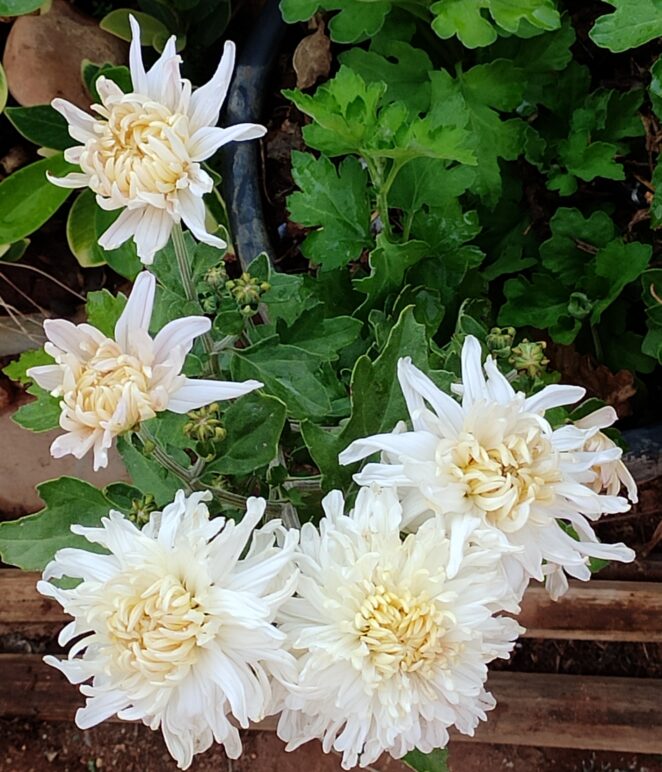 It is the middle of summer and these Chrysanthemums are still blooming. They usually bloom from mid September to December. However, this one has been  going on and on.  I gave this plant a hard pruning at the end of the December and to my surprise it not only grew back vigorously but started to bloom again. I was hoping that it would stop blooming so I could give it another hard pruning, however right now it looks like it will go on and on.

The tenacity of this plant is admirable, however, because it is blooming in middle of summer the blooms have lost all their color. There are faint shades of pink and yellow showing up in the center as a reminder of what it once was. As you can see there are more buds coming up  and the end of the blooming season is still no where in sight.

There are some people who give and give even though they have reached a stage of needing care themselves.  This reminds me of my Uncle. Just a few minutes before he died at the age of 90 he took a shower, wore his best clothes laid himself on the bed and passed on into eternity. He never allowed anyone to help him, he helped everyone instead. This was one of the greatest life lessons I learned.