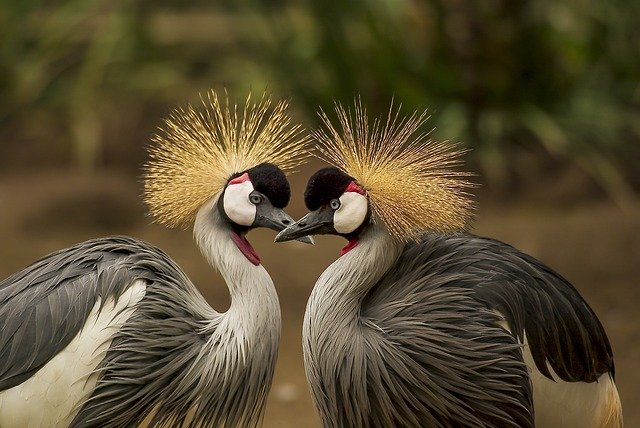 Last year (2019), I published a series of posts listing My Top Tweets from A to Z.  It was fun!  So this year 2020, I decided to continue my tradition with another Tweets series; choosing random topics of interest to me.

The topic for this post is the CRANE.  Almost every country or culture has something that symbolizes good fortune, happiness and longevity. In Japan, that symbol is the crane.  I picked this topic, combined it with my admiration for Asian art, and found these wonderful tweets.  Enjoy!

In ancient Japanese legend it is said that if a person folds 1000 origami cranes then they shall have their wish granted by the gods.#FolkloreThursday #Japan #art #Origami #folklore #ukiyoe #tradition
Artwork by Terazaki, 1906 pic.twitter.com/xOYizi82ZG

Rashkis 5th grade art students listened to Sadako and the Thousand Paper Cranes, the true story of a girl in post-war Japan. As a group, the students folded 1000 origami cranes in a variety of sizes and papers. Their wish is for a peaceful world to live in. pic.twitter.com/WWnMTQvHSq

The elegant red-crowned crane is a symbol of peace, happiness and longevity in Japanese art and culture.

When #WPYalumni @TimLamanPhoto went to Hokkaido in Japan to shoot a story about wildlife in the winter, he fell in love with them, and how beautiful they look in the snow. pic.twitter.com/ULAblILLgU

In East Asia it was believed the mystical crane could live for 1000 years. It came to be seen as a symbol of longevity, good fortune and happiness.#FolkloreThursday #birds #Japan #symbolism #ukiyoe #art
Artwork by Utagawa Hiroshige pic.twitter.com/3hEc9ZTxnz

Apparently 1,000 folded paper cranes equals one wish, so you already know my art class jumped on that chance and made them all. We sent them to the children’s peace monument in Hiroshima, Japan and they arrived today!! pic.twitter.com/dFP153BUl8