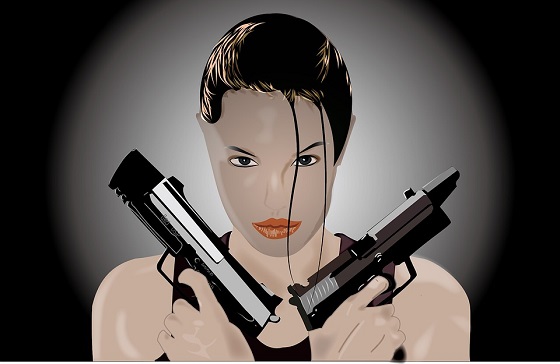 Everybody loves Top 10 lists or countdowns. I saw one on the Internet where they were listing the Top 10 Bond Bad Girls. These were the women in the James Bond films who were “not very nice”, a euphemistic phrase for really bad and evil.

I disagreed with the entire list. In my humble opinion, the baddest Bond bad girl was someone who was never cast for the part. WHY? Because nobody asked me who to pick!!

Nobody asked me and/or perhaps nobody ever even asked her.  (???)  But I think the baddest Bond bad girl who never was .. should have been, would have been or could have been Angelina Jolie.

Oh yeah! I had this all worked out. Angelina Jolie was going to be the worse, the most wicked, the baddest, the evilest woman James Bond has ever encountered while performing his duties for “God and country” on the job for Her Majesty’s Secret Service.

But there’s the surprise AT The End.

It will turn out that Ms. Jolie is not really bad at all.

She was a Double O agent who had gone deep undercover and the whole time Bond thought she was working for The Enemy, it turns out she was a Double O working WITH Bond FOR Her Majesty’s Secret Service all along.

Of course, she dies in The End, saving Bond’s life. Bond ONLY realizes who and what she is in The End.

I think the author Ian Fleming, who created the world’s most popular secret agent spy hero, would have given his nod of approval to MY plot twist.

Anyway!  It’s too late now to cast Ms. Jolie, as she is no longer in her prime, and her Lara Croft days are over.

But I still think my idea is really good. However, I honestly can’t think of anybody else who could have pulled off a part like that better than Angelina Jolie.  Can you?

Hence, her name is the only name on the list of “MY Favorite Baddest Bond Bad Girl Who Never Was”.