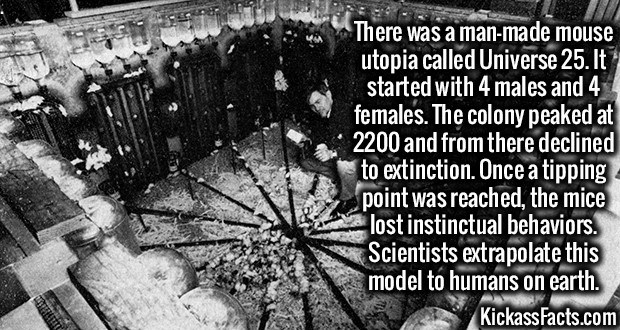 I was introduced to the Mouse Utopia Experiment aka “behavioral sink“. It was run by ethologist John B. Calhoun to describe the collapse in behavior which resulted from overcrowding.

The experiment starts with 8 rats, 4 female and 4 male, in an environment (“Universe 25”) he created for the rats which could house and supply up to a population of 3000.

The population grew rapidly, also doubling every 60 days. Then it came to a point whereby there is slight overcrowding or that “new” mice couldn’t have their own “space” as most are already taken. There are also males who struggle to get acceptance.Violence broke out within some of the mice, typically the outcasted.

Then, there is the “beautiful ones” who are more interested in grooming, eating and sleeping than involving with others and having sex.

Also due to the violence (sometimes younger males challenge the alpha male for position and the right to mate) there are a generation of young that are exposed to violence, neglect or even death because both parents are showing such behaviours.

Then at the end, the population headed towards extinction when the population hits 2200. The death rate is high and the birthrate couldn’t keep up. There are still many younger generations who are not so willing to step up and double the population.

So of them as stated, “aren’t able to cope with the multiple contacts with soo many individuals”… Anyway, the whol;e population got wiped out.

Many says this is the future of human race, and that we’re the “beautiful ones”. But I’m not sure. But I just find this experiment really interesting.