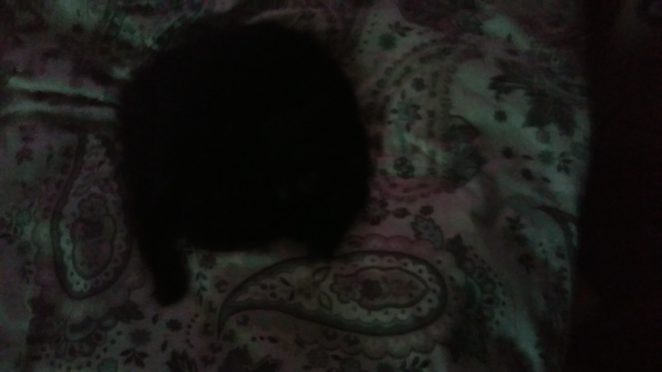 I’m not an especially superstitious sort of person. However, five days ago, one of our kitties went missing. I didn’t mention it because I didn’t want to jinx the chance of her returning.

Her name is Thunder, owing to the fact that she has a purr that threatens to shake the house. She is coal black and is tiny, though she is full-grown. Her mother was less than half the size of a typical housecat, so we knew that she would never be very large. We also have one of her sisters who has an even smaller stature but is calico.

I was drawn to Thunder because I simply like black cats and lost a special black cat about a year ago.

As I said, she disappeared five days ago. We had no doubt at all that she’d gotten outside. For several of our cats, that wouldn’t have been a major problem because they used to come and go as they pleased. Thunder has never been an outdoor cat.

She also disappeared about the time that we started having frequent rain showers, snowshowers, and windy conditions and it was the time that the nightly temperatures started dropping below freezing every night. Adding to the worry, several days ago, there were a number of sightings of a mountain lion in our neighborhood. While cougars typically avoid humans, cats and dogs are snacks to a cougar.

Then there was the fact that Thunder was used to being fed every morning and every night. For five days, she had nothing to eat. Small animals generally need to eat much more, in relation to their body weight, than large animals, just to survive.

The odds were stacked against Thunder and each day that went by, the lower the chances were that we’d ever see her again. After five days, the situation was dismal, to say the least.

We looked for her and called for her, but there was no sign at all of her. We naturally thought the worst.

Now, one of the things I love about Sundays is that we get to go to a small group Bible study on Sunday night. Being someone who tries hard to be a man of God, there are things that absolutely shouldn’t slip my mind. One of those is to bring all things to God in prayer. (Philippians 4:6) That scripture doesn’t say some things or most things, it says ALL things. It struck me that I hadn’t even once petitioned God for the safe return of Thunder! This scripture was brought up in the study, and for the first time since she went missing, I prayed that Thunder would return safely to us.

Less than 10 minutes later, we pulled into our driveway. Guess who was on the porch, crying and waiting for us? Thunder! I don’t believe in coincidences.

We brought her in and fed her and she is currently curled up on the bed, sleeping, safe, sound, and fed. That is the reason the picture of her didn’t turn out well; the room is dark, she’s a black cat and she is on a dark background. She is no worse for wear, except that she lost even more weight.

We are quite happy to have her back and she seems just as happy to be back. Our kitty has returned.