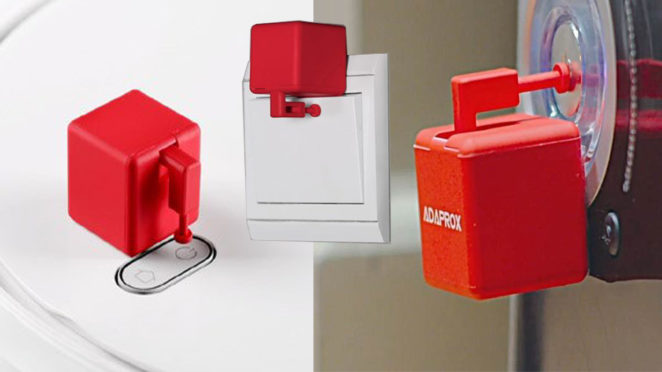 This little robot can open or close any button controlled by the phone app. It can make unlimited devices automatic and smart.  His Name is “Finger robot”, which looks like a miniature square cube.

Finger robot powered by 3D printers can open and close every switch with its fingertips. You can also control it from the app or switch it on or off by a timer, whether it’s the TV switch or the house lights on or off. Although it does contain some hardware and software that can make the entire home fully automated. But first they cost too much. Secondly it’s not easy to add new devices. That’s why Finger robot is built to work on any device connected to its switch. On the other hand, it also costs very little.  Finger robot makers have called it the “remote control finger”.

It is developed by Adaprox Company.  Finger robot can be used to push, pull and flip any switch. Similarly, home-controlled voice-controlled software such as Siri or Google can also run fingerprints. The Blue Tooth Range of Finger robot is 50 meters, but with the addition of one hardware can increase this distance.  That way you can start the heater or air conditioning before stepping into the house.