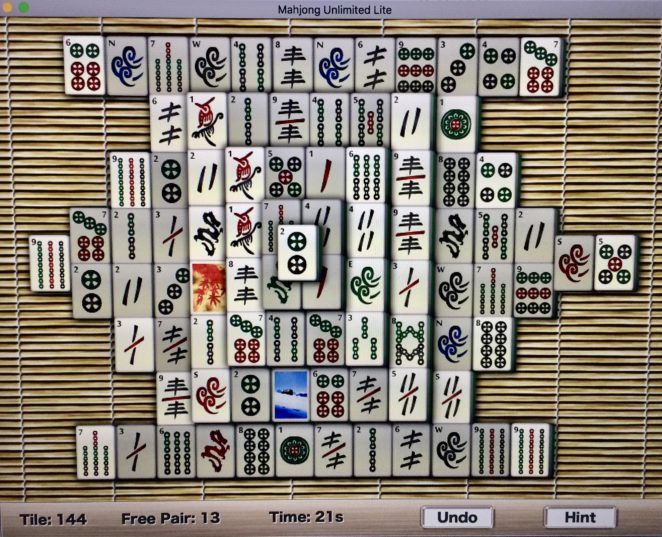 Have you ever played the free online game called Mahjong? My son used to play several different ones a lot. I started playing years ago and enjoy the diversion. Especially when I cannot get logged into this site! The one pictured is one of my favorites. Not a lot of thinking involved. Just match the tiles. You should try the free game. This is the only online game I play.

Click here to see what games you have to choose from: Mahjong Games.

Throughout China’s history, there were several games similar to modern mahjong. Ya Pei, a game that originated in the Sung Dynasty (960-1279 AD), used wood and ivory cards similar to today’s mahjong tiles. Another game, Ma Tiae, from the Ming Dynasty, built on Ya Pei and is even closer to modern mahjong. After centuries of evolving game strategies, it is believed that the game we now know as mahjong was created in the late 19th century, however, there is still some debate on who is responsible for its creation. One legend suggests that it was a Chinese nobleman in Shanghai, and another implies it was Chinese army officers during the Taiping Rebellion.

An American named Joseph Babcock is believed responsible for bringing the game to the United States in 1920 after picking it up in China, where he worked for an oil company. The popularity of the game in the United States grew rapidly. Babcock published a set of rules and several companies, such as Milton Bradley and Parker Brothers, created game sets. The craze spread around the country but was most popular in New York City where the National Mah Jongg League was eventually created.

As mahjong became more popular in the United States and around the world, its practice was discouraged in its birthplace of China. Chinese government officials only wanted elite citizens playing the game because they feared that peasants might develop their mental capacities through playing. After the Communist Revolution of the late 1940s, Chairman Mao outlawed mahjong, claiming it was a capitalist game because players would sometimes gamble on the outcome. Prohibition of the game in China was lifted in 1985, and it has rebounded in popularity. One of the reasons mahjong is so popular in China is because of the symbolism in different elements of the game.

I am continuing with the 365 Photos Challenge and I am now on Day 113.