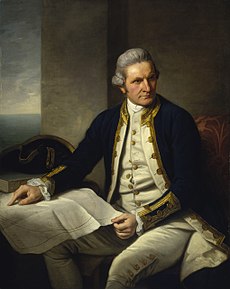 On February 14, 1779, natives of Hawaii killed the famous Captain James Cook, a great English explorer and seaman, on his third visit to this Pacific island group.

In January 1778 he first visited the Hawaiian Islands.

Cook and his crew were greeted by enchanted Hawaiians, who admired the large ships of Europeans.

It is suspected that the Hawaiians attached religious importance to the Europeans’ first stay on their islands.

At the time of Cook’s arrival, the locals organized a festival dedicated to Lonoi, the fertility god. Cook and his compatriots were welcomed as gods and exploited the goodwill of Hawaiians for the next month. Their relationship first became strained after one of the crew members died, as his death showed that Europeans were also mortals.

On February 4, 1779, British ships sailed from Kealakekua Bay, but terrible sea storms damaged the top of the Resolution ship and after only a week at sea the expedition was forced to return to Hawaii. The Hawaiians stoned Cook and his men, on which occasion James Cook was killed.