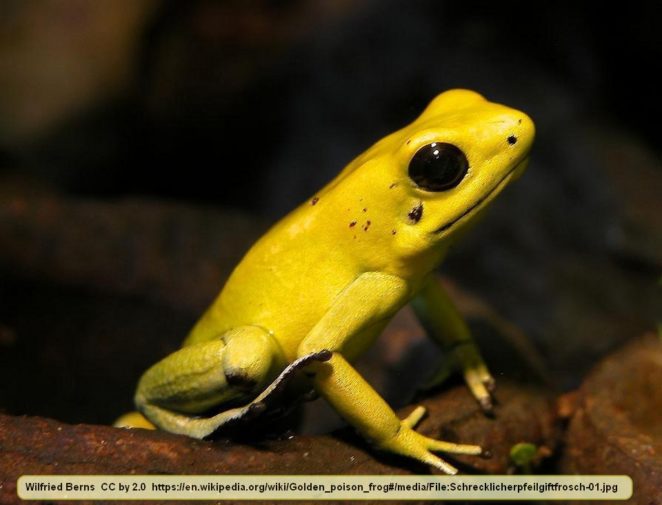 A rather interesting, though somewhat unpleasant question came in regarding tree frogs. The question was, what would happen if you ate a tree frog that was in a bag of organic green salad.

Despite all of this, there are a lot of kinds of tree frogs. Some of them are toxic and the toxicity varies from one species to another. Some species of tree frogs aren’t toxic at all. If a person ate one of those that wasn’t toxic, nothing much would happen. If they ate one that was toxic, the results could be unpleasant to deadly.

Thus, it would depend entirely on what kind of tree frog they ate. The problem is that it isn’t always easy for the average person to tell the difference. Take a look at the frog in the picture. This is one of the deadly ones and it can appear in different colors, including some that aren’t bright.

This frog has alkaloids in its skin that prevent nerves from firing. Even a small amount of this poison can cause a heart attack in a human. This frog is called the Golden Poison Arrow frog, though it isn’t always yellow or golden. Then again, you are very unlikely to find it in a bag of organic green salad, since it is only found in Colombia. As long as your organic green salad didn’t come from Colombia, there is little chance that you’d need to worry about this little frog. Of course, there are still other tree frogs that are toxic.

Incidentally, ‘poison arrow frog’ isn’t a very accurate label as few frogs are actually used to tip poison arrows. In fact, few are used to tip the poison darts used in blow-guns, either.

The best advice, not that I probably need to give it to anyone who is apt to read this, is to not eat tree frogs, whether they are in a bag of organic green salad or not.