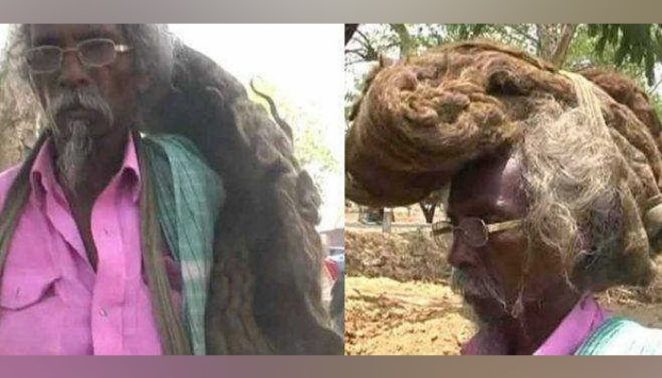 Most male gentlemen are also fond of growing hair and keeping them as tall and dense as women, but an Indian citizen has growned hair but did not bother to wash them for 40 years.

The 63 year-old ‘Sakal DevTodo’ hair is about 6 feet long and he says that he has not washed and nor shaved hair for 40 years, which has caused his hair to become badly tangled.

Mr Sakal Dev is from Bihar, India. He says that he started growing his hair from the age of 22 and considers these hair a mercy from his Hindu God ‘Shiva’. that is why he has never washed or cut his hair for 40 years.

To protect the 6-foot-long hair from getting too dirty, he has wrapped it in white cloth.Ever since Sakal Dev started growing his hair, people have known him as ‘Mahatma ji’ which means respect for them.

The Sakal Dev feels that he naturally has the power to solve people’s problems. Sakal is not the first Indian man to be famous for his long hair In fact, a man from Gujarat named ‘Sujee Bhai Rathwa’ also has 19 meters long hair.