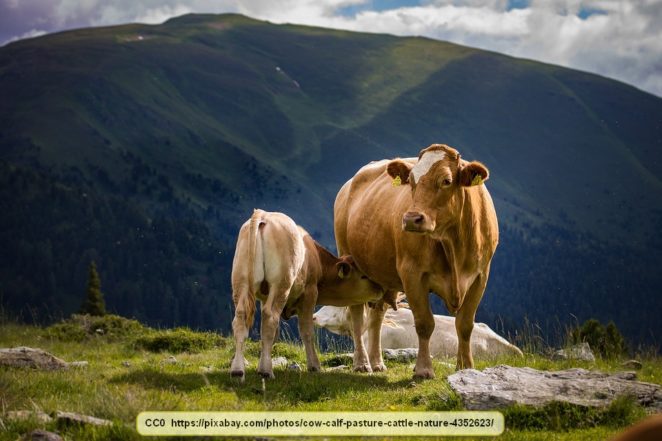 I suppose that it isn’t surprising that many people who’ve been raised in cities often don’t know a great deal about such things as milk production, having never been around cattle. So it was with a question I recently saw and answered that was along the lines of, “Why can’t humans continually produce milk like cows and other animals?”

To begin with, the question is based on an incorrect premise. Cows and other animals don’t continually produce milk. It is easy to see why a city person might think otherwise if they’ve never been around a dairy farm or private farm to see what is involved.

Mammals, including humans, begin lactating or producing milk when the female becomes pregnant. Milk is designed to be a rich source of nutrition for the young. In the case of cattle, a female that hasn’t yet had a calf is called a heifer. The farmer breeds her with a bull and when she is pregnant, she begins to produce milk. She is also a cow and no longer a heifer when she becomes pregnant.

However, she doesn’t produce milk indefinitely. After a time, the milk production wanes and the farmer again breeds her with a bull so she can produce more milk.

This isn’t greatly different than a human female. She begins lactating during pregnancy, but not continuously. If she has the stimulation of the mammary glands, usually through breastfeeding in humans and milking in cows, she can produce milk for quite a while. In some cultures, it isn’t uncommon for women to breastfeed their children until the children are 2 or 3-years-old or older. In a few cases, human children were still breastfeeding beyond the age of 6. The woman is producing milk the entire time. In fact, in some places, there are professional nursemaids who breastfeed the children of other women. This is how stimulation plays a big role, too. If a woman gives birth and doesn’t continue breastfeeding or doesn’t breastfeed in the first place, she’ll stop lactating and will ‘dry up’.

Cows are the same way. Stimulation is necessary but even with stimulation, the cow doesn’t produce milk forever. She must be periodically bred for milk production to continue.

One of the biggest differences between women and cows in regard to milk production is the amount of milk produced, however, this isn’t surprising, either. A calf requires a great deal more milk than a human infant, so cows produce more milk.

Incidentally, this brings up a peeve of mine. People often refer to bovines as cows. Only female cattle that have had a calf are cows. The collective term for a group of bovines is cattle, not cows. A heifer is a female that has never had a calf. She isn’t a cow until she becomes pregnant. Bulls definitely aren’t cows and will never become pregnant, so they will never be cows. Steers are neutered bulls, so they will never be cows, either. Yet, I’ve heard people refer to a field full of cattle as being grazed by cows. Words do mean things.

Anyway, the point is that milk production isn’t continuous and endless in any mammal, including cows and humans. In order to continuously produce milk, they must occasionally be bred.