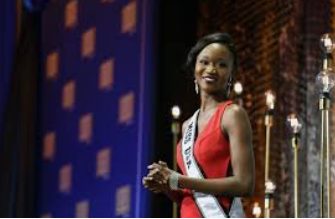 Here we all are, it’s the 7th of the 7th month 2020. It almost sounds like the title of a sci-fi movie, except that we are all starring in it. This is that future which several of us remaining relics here on Virily were merely dreaming of!

Over the weekend, I watched an inspiring speech by Deshauna Barber, former Miss USA of 2016. Deshauna is also a captain in the United States Army Reserve. Back in 2010, while working at Target, a stranger encouraged her to enter the state pageant.

Deshauna never ever pictured herself entering a pageant but was eventually persuaded, and entered her first state pageant. But she didn’t win. So, for the next 6 years, she failed to win over and over again 6 times in a row…until, finally in 2016…Deshauna won Miss District of Columbia, and 6 months later, the Miss USA title.

I have no idea how beauty pageants work..but what I do know, is Deshauna very clearly embraced all the NO’s that kept heading her way year after year. Many of us will try again after we fail, maybe once, maybe twice, but, trying a 3rd, 4th, 5th, 6th time? That takes a VERY different level of determination and willpower. And, Deshauna was able to be in that state of mind simply because she was afraid! She was afraid of Regret. To her, giving up is the birth of regret.

Many of us fail to see how powerful a motivator regret can be, in pushing you to continue. Because the reality of life is, that we’re always going to get more NO’s thrown at us than yeses. We’ve all experienced some sort of failure in our physical or mental abilities, careers, studies, our relationships, our goals… that’s all part of growth and it’s all about life.

But what is it that sets apart the successful from the mediocre, Is that the successful don’t take NO for an answer. They don’t let the No’s dictate the rest of their future. So, never be afraid of getting No’s thrown at you. But rather, as Deshauna shared in her speech, “Be afraid of the possibility of a yes you’ve prematurely destroyed because you quit. As an entrepreneur, I’ve had to overcome many failures, and, no’s along the way. And if I had given up earlier on, there would not be the here, writing this. And I would most definitely have lived in regret, and wondering if my dream would have been successful.”

Life is far too short to be stuck in the “what if’s”. If you’re reading this and nodding in agreement.. then it’s time to say NO to giving up! So how can you equip yourself to embrace future No’s that will come your way and turn them into premature Yes’s?