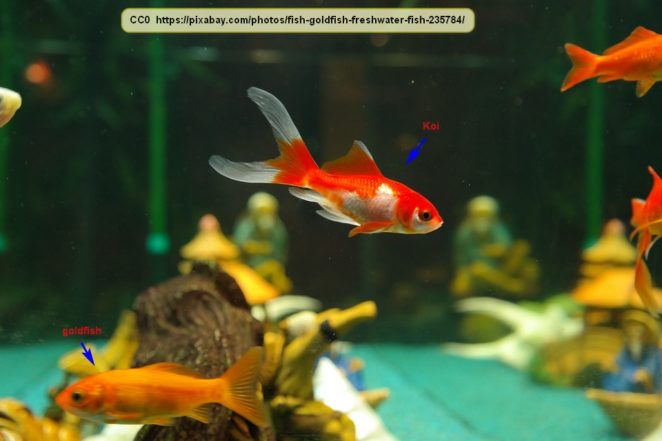 Most people probably know what a goldfish is. The surprising thing is that most people have at one time or another had a pet goldfish. That doesn’t necessarily mean that people know a great deal about this kind of fish.

Why can it be said that most people have had a goldfish at some time in their lives? Because about 480 million goldfish are purchased as pets every year. That is several times more than all of the cats and dogs, combined, that people get on a yearly basis, so the average person is much more likely to have a goldfish than a cat or dog.

Goldfish and koi are in the carp family and they tend to be rather long-lived. With proper care, it isn’t unusual for a goldfish to live for 20 or more years and some individuals have been recorded as having lived twice this long.

If a person has had goldfish or has watched them, one thing they may have noticed is that the fish tends to frequently ‘bump into’ plants, ornaments, or the sides of the tank. This behavior is actually easily explainable. Goldfish have taste buds on the outside of their lips. In effect, when they bump into things, they are tasting the object.

Here is also something that many people don’t know; a goldfish doesn’t have a stomach. When they swallow food, the food passes immediately into the intestines for digestion.

A bit of trivia; every year of a goldfish’s life, each scale gets a little larger. This growth can be seen under a microscope as a ring called a circuli. Although the circuli can’t be seen with the naked eye, this means that with a microscope, it is possible to tell how old the goldfish is by counting the rings on the scales.

Additionally, goldfish can be taught and they retain that conditioning for a long time. They have good memories. They can also learn to tell the difference between people, from the appearance of the person, and can recognize different people. Goldfish don’t have exceptional eyesight, however, they can see untraviolet, which humans can’t see. They can also see and will often chase a laser pointer of the sort used to play with cats and dogs.

Interestingly, goldfish don’t have tongues, but they have a better sense of smell than people.

A last bit of trivia; putting a goldfish in a fishbowl is basically sentencing the fish to death. Goldfish bowls are designed for humans to look at, not for goldfish to live in and the water rapidly grows too toxic for the fish to survive in. If you are thinking of getting a goldfish, put it in an aquarium, not a fishbowl.