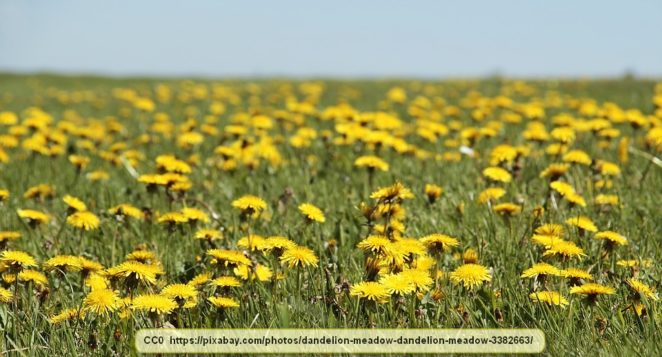 There is little of a common dandelion (Taraxacum officinale) that isn’t edible; leaves, crown, root, flowers, and seeds can all be eaten. Dandelions are also found in much of the world today.

In North America, dandelions are an invasive species. Millions of dollars are spent every year on poisons to kill dandelions in the US alone. However, dandelions aren’t even native to North America. They were specifically and purposely brought here and planted by settlers, to be used as food.

The settlers were unacquainted with many of the large numbers of edible plants in North America, but they did know that dandelions could be eaten, so they were planted on purpose. It didn’t take long for dandelions to escape containment and spread, due to their invasive nature. They are now found throughout North America and are treated as invasive weeds in most places.

None of that stops the fact that dandelions are still quite edible and nutritious. Older plants become quite bitter, owing to the milky sap the plants contain. However, this can be removed by lightly boiling them in salted water. With some dandelions, more than one saltwater bath may be necessary to remove all the bitterness. However, it isn’t particularly difficult to do.

One of my favorite spring vegetables is still dandelion crowns. The crown of a dandelion is the part that tends to be whitish and is above the roots, just above the ground. The leaves can be cooked the same way, though they are usually bitterer and need more saltwater baths to remove the bitterness.

The roots can be eaten in a number of ways and some people dry them and grind them as a no-caffeine substitute for coffee. The ground root can also be added to ground coffee to lower the amount of caffeine the coffee contains.

Dandelion flowers are sometimes made into wine and they can also be batter-fried.

During the great depression in the US in the 1930s, a large number of people escaped starvation by, in part, eating dandelions. My grandmother, who was living during the depression, had a number of dandelion recipes. This weed is just as edible now as it was back then, but many people ignore this food source and seem more apt to try to poison it or dig it up than to eat it.