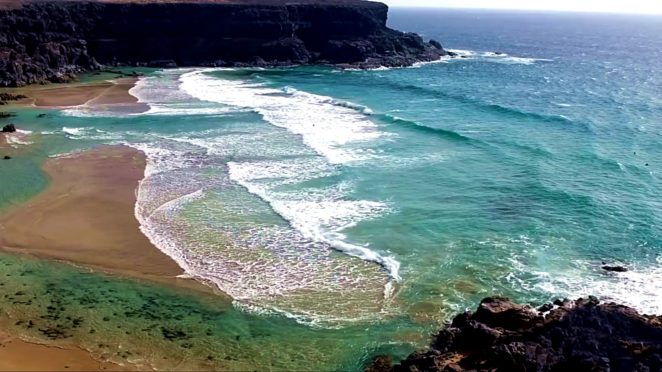 Yes, I always thought is it most not an interesting island of Canary islands, so I did not expect that will be overwhelmed by emotions to see this wild island. I am excited. And it’s least to say so.

I love our Baltic sea, its waves, but it’s not comparable to the Atlantic Ocean we are now at. The waves are incredible, the paradise for surfers.

Fuerteventura – an island of volcanic origin, lava – a lot, greenery – a little. Mountains without any greenery, like in the Moon, sand dunes like a desert where you can get lost…

The half-island is so light because of the yellow sand, and the other part is black because of the lava. Little white and coral homes, friendly, cheerful locals, and delicious seafood on the shore of the murmuring ocean.

My husband got too burned yesterday and had a bad sleep, so before we again go to the next trip around the island, he went to take a short nap, and I got some free time to check Virily.

Nature is ascetic but beautiful in its own way. Island is not overcrowded by people, when you drive around the island, you rarely meet anyone on the road. So, there is a lot of space to be with yourself, to survive the beauty of HERE and NOW.

To be honest, the landscapes are breathtaking, photography cannot convey the whole spectrum of the world around.