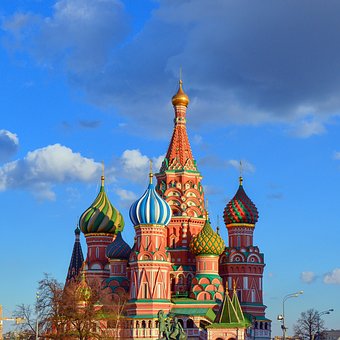 The Cathedral of Vasily the Blessed or Saint Basil’s Cathedral is a church in Red Square, Moscow, Russia.  It is now a museum.

It was built between 1555-1561 by order of Ivan the Terrible to commemorate the capture of Kazan and Astrakhan.  The original building known as Trinity Church and later as Trinity Cathedral, contained 8 churches arranged around a 9th.  A 10th church was erected in 1588 over the grave of Saint Vasily (Basil).  Dmitry Shvidkovsky states in his book, “Russian Architecture and the West”, that “it is like no other Russian building…”

The foundation is constructed of white stone; and the churches are built with red brick, a relatively new material at the time.  Russian attitudes toward color changed in the 17th century toward brighter colors; so between the 1680s to 1848 color was added.  The domes, which were covered in tin, were gilded in white, red and golden colors; green and blue ceramic inserts were also added.

As part of the state atheism, the church was confiscated from the Russian Orthodox community and has operated as a division of the State Historical Museum since 1928.  It remains a federal property of the Russian Federation.