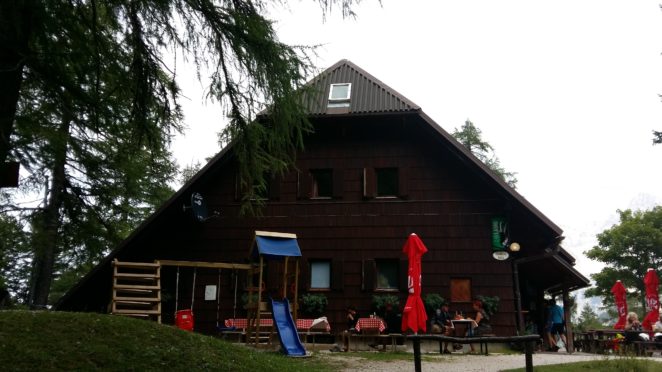 Erjavčeva koča na Vršiču (1525 m) is a mountain stand that stands on a small hill along the road to Vršič just below the passage on the Gorenjska side. It is named after the Slovenian naturalist and writer Fran Erjavcu. The first cottage, built on July 14, 1901 by the German-Austrian mountain society as Vosshütte. During the First World War, the builders of the Vršič road used the cottage. After the war, in 1919 the hut was taken over by the Slovenian Mountaineering Society, repaired and enlarged, and reopened in 1922. It was renamed by the Slovenian naturalist and narrator Fran Erjavac (1834-1887). In 1949 electricity was supplied, and in 1951 a telephone was also provided. In 1993, the old wooden wooden cottage replaced the new, more modern one. The cottage is well maintained and open throughout the year. Today there are 100 seats in the restaurant, a bar counter, 29 beds on the shared bed and 70 beds in 7 rooms. The hut has toilets, washbasins and showers with warm and cold water, central heating, electricity, telephone.