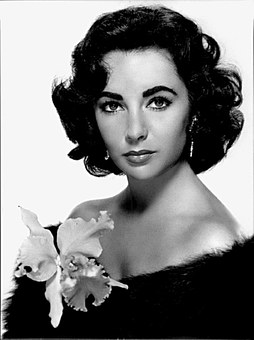 Dame Elizabeth Rosemond Taylor (Elizabeth Taylor) was born on February 27, 1932.  She was a British-American actress, businesswoman and humanitarian.  Her family moved from London to Los Angeles in early 1939 with concerns about impending war in Europe.

She auditioned for two different studios and was offered contracts at each one.  Universal’s offer was accepted.  Her first role was in 1941 in “There’s One Born Every Minute”, followed by “Lassie Come Home” and “Jane Eyre” in 1943 and “White Cliffs of Dover” in 1944.  Taylor’s blue/violet eyes and her double eyelashes, a genetic mutation, were some of her most stunning features.

At the age of 12 she received her first starring role in “National Velvet” in 1944.  She received her first mature role in 1949 in the “Conspirator”.  The 1950s brought “Father of the Bride” with Spencer Tracy and “A Place in the Sun”.  Taylor wanted to end her career in the early 1950s because she didn’t care for the roles she was given and didn’t like the control the studio had over her; however in the mid 1950s she began receiving roles more to her liking.  She starred in “Giant”, “Cat on a Hot Tin Roof” and “Suddenly Last Summer”.

In 1960 she was cast in “BUtterfield 8”.  She didn’t care for the role of a call girl; but she won an Academy Award for Best Actress.  In 1963 she was paid a record-breaking $1 million dollars for her starring role in “Cleopatra”.  It’s during the filming of this movie that she and Richard Burton became an item.  They starred in 11 films together including “The V.I.P.s”, “Taming of the Shrew” and “Who’s Afraid of Virginia Woolf?”  The latter garnered the best reviews of her career and a second Academy Award, plus other commendations.  She was married 8 times…2 times to Richard Burton.

In the 1980s she was the first celebrity to launch a perfume brand.  She was also one of the first celebrities to support HIV/AIDS research.  She co-founded the American Foundation for AIDS Research in 1985, and in 1991, the Elizabeth Taylor AIDS Foundation.  She was known for her philanthropy and received the Presidential Citizens Medal as a result.

She lived a jet-set lifestyle, survived several  major illnesses and assembled one of the most expensive collections of jewelry in the world!  She is also known for her friendship with Michael Jackson.

She died in 2011 of congestive heart failure after several years of illness.