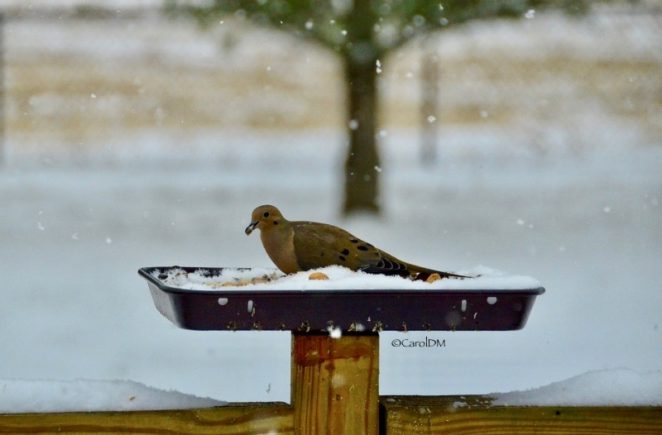 It is one of the most abundant and widespread of all North American birds. It is also a leading gamebird, with more than 20 million birds (up to 70 million in some years) shot annually in the U.S., both for sport and for meat.

Its ability to sustain its population under such pressure is due to its prolific breeding; in warm areas, one pair may raise up to six broods of two young each in a single year. The wings make an unusual whistling sound upon take-off and landing, a form of sonation. The bird is a strong flier, capable of speeds up to 55 mph. It is the national bird of the British Virgin Islands.

Mourning doves are light grey and brown and generally muted in color. Males and females are similar in appearance. Amazing fact, the species is generally, monogamous ( one partner for life) with two squabs (young) per brood. Both parents incubate and care for the young. Mourning doves eat almost exclusively seeds, but the young are fed crop m ilk by their parents.

Always amazing to learn about the birds around us. This mourning dove has a soft “coo”  sound and I always know when they are around. This photo was snapped at my deck feeder a few years ago, after a snow storm. He is eating a sunflower seed.

These mourning doves are different than than the black pigeons seen in many cities.