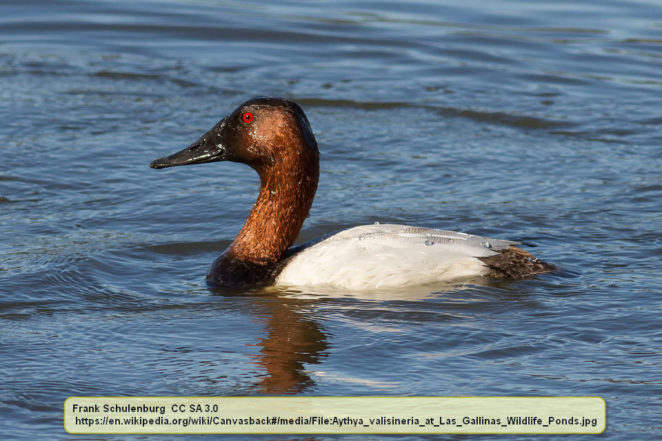 A person could simply say that a canvasback is a duck, but that certainly wouldn’t give a great deal of information. As ducks go, canvasbacks are interesting.

Canvasback ducks (Aythya valisineria) are about the same length as a mallard, but they have a stout, dense body. As such, they are the largest duck in North America. These ducks often weigh about three and a half pounds.

These are diving ducks that often take their food from the bottom of shallow lakes. Most of that food consists of water plants; leaves, roots, tubers, and so forth. They do occasionally eat snails or insect larvae, but the diet is dominated by plant material. Probably because of this, they are said to be the best tasting kind of duck.

Canvasbacks usually build a large nest in reed beds and cattails that grow in open water. This gives them some protection against predation. They especially tend to breed in bodies of water in prairie states and provinces. They breed as far north as Alaska and Northwest Canada.

They usually lay around 10 eggs, though there can be as few as a half-dozen or as many as a dozen.

Canvasbacks get their name from the white to tan color of the back of the male, which contrasts with the chestnut red head. The bill is black and the eyes are red. The feet and legs are sort of bluish gray.

The head and bill are sloping, wedged shaped and this is an identifier for this species of duck.

The legs of a canvasback are set well back on the body, which helps them when it comes to diving and they may remain submerged for up to a minute. However, this body arrangement also means that they walk on land with some difficulty and awkwardly at best.

The canvasback is a rather good looking duck that is commonly seen in the northern US and Canada. It is definitely good eating and it is also interesting in its diving habits.