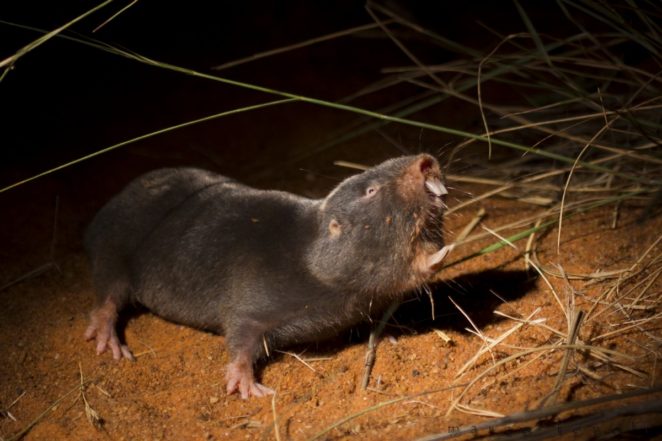 The Damaraland Mole Rat has thick, velvety fur and it can be in a number of different colors. Their body size is about 4 inches to 8 inches and they have a fairly short tail.

They have very large teeth. When I first saw the picture I thought perhaps that was mainly for protection. I was wrong . They are  used mainly for digging.

The social structure is worth noting. They live in colonies and create a large network of connecting burrows. They are not friendly with other colonies. Up to 25 individuals make up a colony and share sleeping space and attached burrows. It is believed that the largest female is the only one who reproduces. The estimate is that only one or perhaps two males participate.

These animals have a very different sleep cycle. They rarely leave the burrow and have different rest or sleep cycles that include five cycles of sleep in a twenty four hour period.

The Damaraland Mole Rat eats tubers, roots, bulbs, invertebrates and some aloe leaves. They gather the food by digging tunnels.

I will probably never see a Damaraland Mole Rat and I have enjoyed learning about them.