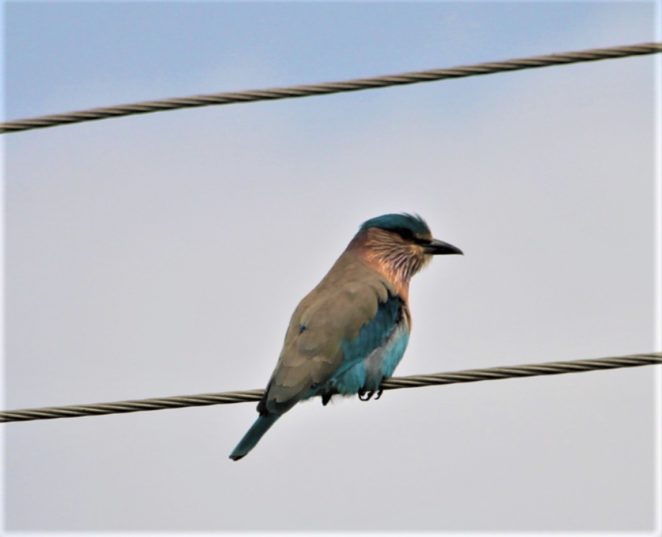 This bird is very common in India, South and West Asia according to Wikipedia. However, I have seen this bird only a couple of time during my treks in wooded areas. Last week while as my husband and I were travelling we saw this bird swoop down and perch itself on the high tension wire alongside the highway.

As there wasn’t much traffic we stopped off the road so I could get a picture. My lens is not really meant this this kind of distances but I was still able to get a few shots. The bright blue feathers caught my attention  (though the picture shows more of its grayish brown side) despite the speed at which we were travelling.

My interest was piqued as I read a little bit about this bird. Apparently the male puts on a show stopping aerobatic display during the mating season. It flies high up in the air and comes back down in a rotating motion from where it gets its name roller.

The male and the female of this specials look alike.

The bird has a few contrasting shades of blue in its wings which is clearly invisible while in flight than while it is perched.

The Indian roller has various colors on its body, the throat is purple/lilac in color, while while the tail is sky blue with a hint of prushian blue. There are also tints of green on the under body of the Indian Roller.

The bird feeds on small insects and reptiles and moths. Frogs however are high on the Indian Rollers’ menu.

The pretty birds are make crow like noises and mate in early spring.