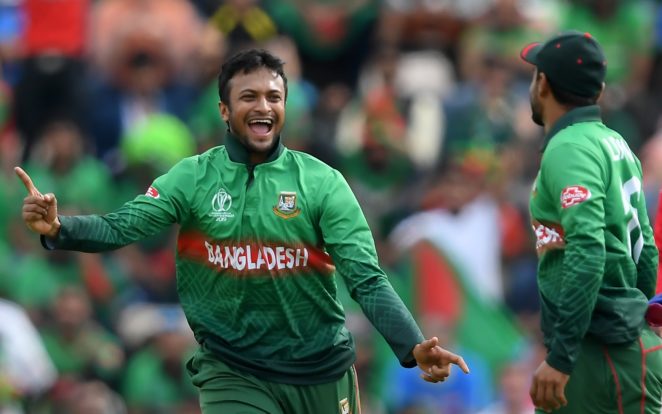 Bangladesh close-in on the top four after 62 runs convincing win against Afganistan in Southempton. Their two remaining matches are against India and Pakistan.

A day before match against Bangladesh, Afghan captain Gulbadin Naib made some lofty claims to beat Bangladesh but they can’t show any kind of resistance on the field. In fact, it was a one sided match. Bangladesh dominated from the first to last ball. On a slow track where ball was not coming on to the bat, Bangladesh manage a decent total of 262 which proved more than enough for inexperience Afghanistan. Afghanistan bowled out on 200 runs.

Once again Shakib al Hasan and Mushfiq ur Rahim were star performer with the bat for Bangladesh with 51 and 83 runs respectively. Shakib al Hasan was also brilliant with the bowl. He took 5/29 in his ten overs quota. He also became the second all rounder after Yuraj Singh (India) in the history of world cup who scored a half century and took five wickets in the same game. Over all brilliant display of performance by Bangal tigers.