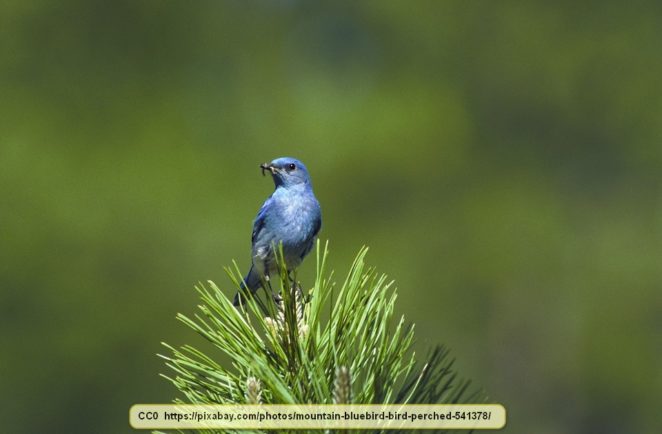 Montana is well-known for being rich in wildlife. Part of the reason is the amount of wilderness in the state and part of it is because Montana straddles the Continental Divide. The latter means that eastern animals, western animals, and mountain animals all live in the state. The mountain bluebird is one of the mountainous birds.

The appearance is different, though, in that mountain bluebird males are entirely blue, mostly sky-blue though the belly can be bluish-gray. This is the only completely blue bluebird in the US. These birds are a little larger than a sparrow and they are built rather like sparrows, though sparrows aren’t blue. These birds are around 7 inches long and have a wingspan of about one foot.

Mountain bluebirds are pretty insectivores and eat a large number of troublesome insects. However, they also feast on ripe fruits and berries. They are sometimes seen hovering in place in order to feeds, which is unique among the bluebirds.

This kind of bluebird is a songbird and although the song isn’t tremendously melodic, it is still cheerful and agreeable.

It should be noted that bluebirds aren’t the only birds in the US that are colored blue. Bluebird is a collective name of three thrush species and this isn’t to be taken as the same thing as “blue bird”. Notice that bluebird is a single word.