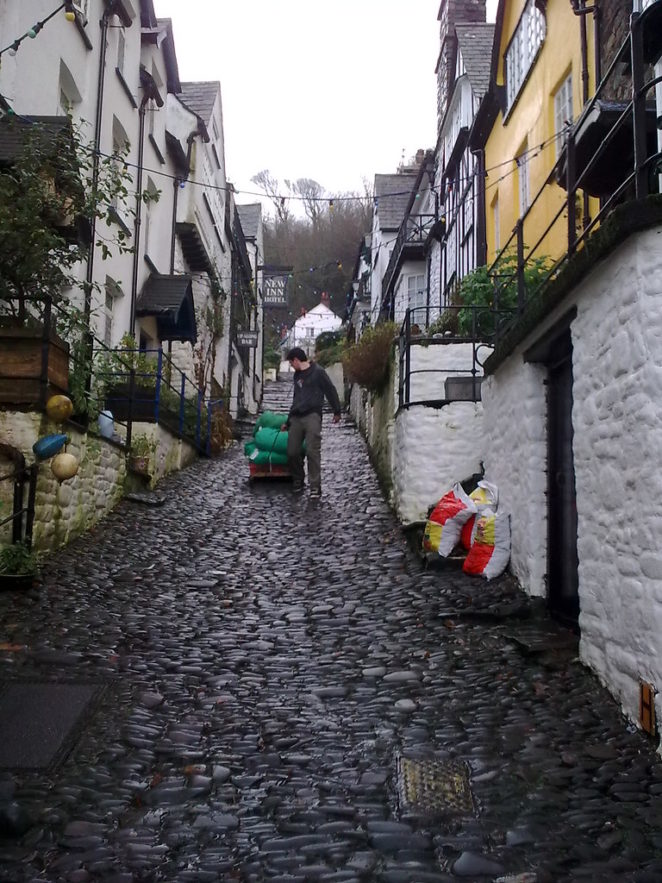 Clovelly is a very unusual village on the north coast of Devon, south-west England, between Barnstaple and Hartland Point.

The village is privately owned and has been carefully preserved so that it looks as close as possible today to the way it looked centuries ago. However, that does not mean that the residents are prevented from having TV aerials, or telephone lines coming to their homes. They must, however, keep their cottages whitewashed and in good repair.

The main feature that sets Clovelly apart from other villages is the fact that its main street is very steep and cobbled, which means that no wheeled vehicles can pass up and down. Goods are transported by donkeys or on wooden sledges that are hauled by hand.

The reason for Clovelly’s existence is that its small harbour is one of the very few safe anchorages along this stretch of coast, which is typified by steep wooded slopes and sheer cliff faces that rise up to 400 feet above the sea. A small fishing community formed around the harbour, and the cottages were originally occupied by the fishermen.

Not much fishing is done here today, but the village has become a tourist attraction in its own right. Visitors must leave their cars at the top of the village and walk down to the harbour – although donkey rides are also possible. Once at the bottom, the only way to get back to one’s car is to climb back up to the top!

As one might expect, Clovelly’s High Street and the harbor area are very popular with tourists, and on sunny days in the height of summer the place can become unpleasantly busy and crowded. A good time to visit Clovelly is therefore out of the tourist season.