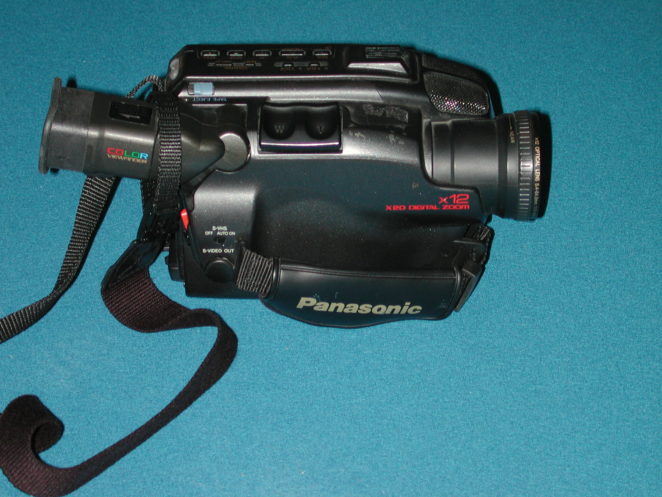 I choose today picture more out of luck than intent. But found it in the folder I shared pictures for the wander project this morning. The image is of our second video camera. We had a VCR camera, or a Video Cassette video camera starting around 1992. We had that camera for some events and family fun outings for about eight years. It just so happened that I was working in Columbus Ohio when the imagination station stores went out of business. I got a great deal on an S-VHS mini camcorder that you see in the picture. VHS was the original type of Cassete video recorder. S-VHS was closer to the quality you saw on television. Although now you can get the quality (HD and 4k) in your cell phone video.

With the rise of cell phones, and the ability of digital cameras to often do still and video in one camera, the stand-alone Video recorder has gone the way of the dinosaur (That always makes me laugh. We forget that it is possible a large meteor hit the earth, and the Dinosaurs did not die from their mistakes, rather the misfortune of not having weapons capable of knocking an asteroid off course). The Video Cassette record (handheld or home-based) is no more. The reality of cameras today is something I’ve now spent three different posts. It is all about knowing what you need from a camera. The value of a camera is what it does for you, not what it does in advertising!

For example, when picking a camera with small children in the house, who liked to take pictures, I picked a camera that could be dropped. Now, boating and being on the water, we need a camera that can shoot underwater but can also get wet. The interesting thing now is the rise of specialty cameras. That is the end of this column. Specialty cameras include those in the list below (and more)

1. Infrared cameras or cameras designed to capture images of heat. Many companies that come to your house to check your windows carry a camera like that to show you the amount of heat your windows are leaking. It is also used for looking at engines and other things that you want even heat distribution.

2. AR cameras – this is a new category and is heavily being consumed by Realtors. Your actual future in a house you are considering buying may tip the scale!

3. Video doorbells so you can see who is at your door, Or who stole your package.

4. Connected security cameras, yes the thief and can break in and break your security camera. But not until after the camera has sent the image to the cloud.

5. High-speed cameras (100 Frames per second or more) sometimes called slo-mo and often used in sporting event replays but also interesting for personal use as well.

The specialist cameras (which also include 3d and 360 cameras mentioned before) give you a chance to figure out what works best for you.

The most important rule when considering having or not having a camera is quite simply what do I need!