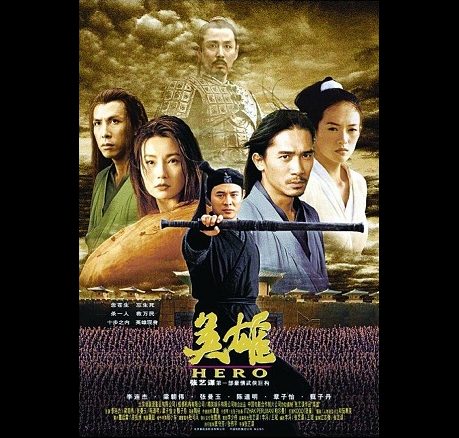 The description for this movie, Hero (2002), provided in the generic search results is“visually arresting martial arts epic set in ancient China”.  It is indeed remarkably visual.  I agree.  In fact, that’s the best part about the film.  Doesn’t matter if you don’t really like the film.  Your eyes will stay glued to the screen because it is soooo visually stunning.  It’s as if gorgeous paintings of Asian art became animated.

I like it for that reason but also because it stars an extremely talented actor, Tony Leung Chiu Wai, as the character, Broken Sword.  He is one of my all-time favorite Chinese actors.

He is the lead actor but the movie is graced with an all-star cast of top names in Asian cinema.  Jet Li. Donnie Yen.  Maggie Cheung. Zhang Ziyi.

Even so!  It’s still not one of the greatest Chinese martial arts films ever made.  Even though it racked up a lot of awards and received favorable reviews when it was released, on a scale of 5 stars, 5 being the best, it gets 3 stars from me.  1.5 stars for the visuals and 1.5 stars because I was happy to see 5 of my favorite Chinese actors all in the same movie!

This guy is even cooler than he looks!

Tony Leung Chiu-wai from Hero and Hard Boiled is gonnae be the actual Mandarin in the MCU Shang-Chi film. Fuck Off! That is tremendous casting. ? pic.twitter.com/WdmM1HdkBT

A moment in film history.

15 years ago today: Hero, starring Jet Li, opened in the US.

It went on to become the first Chinese-language film to rise to #1 at the US box office. ⭐️ pic.twitter.com/85nwNYluc3

When I said “visually stunning” and “animated”, I was not exaggerating.