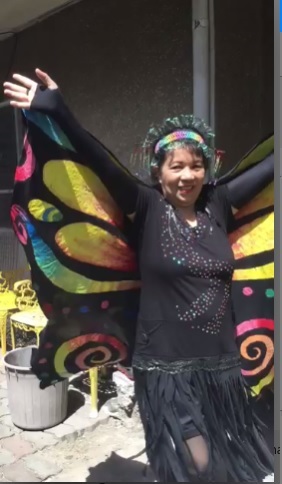 Usually, I don’t write something very personal.  But this time I am so proud of my sister’s creativity that’s why I am very excited to show everybody about it.

She is my elder sister.  When she was younger, she’s shy.   Now when she entered her senior years, she bloomed like a flower.   She became sociable.  She also becomes active to senior citizens’ activities in her community.   A few weeks ago, she was asking the family of what to wear.  Yesterday she joined the Senior Citizen’s Halloween Pageant.   I suggested not to make herself ugly or disgusting even if it’s a Halloween pageant.  Fortunately, she followed the suggestion of her youngest sister,  and she bagged the prize.

These days, wearing a costume is a bit sensitive.  It is quite difficult to figure out which is appropriate and non offensive to religion, race, belief and so on.    However, my sister nailed the best costume she can be, without sacrificing her looks and keeping her beauty without offense.   I just hope she did not offend the butterflies.