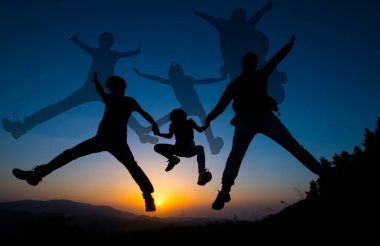 “Everything we call real is made of things that cannot be regarded as real. If quantum mechanics hasn’t profoundly shocked you, you haven’t understood it yet.” ~ Nobel Prize-winning physicist Niels Bohr

As a kid, I loved reading about quantum traveling and the tesseract technique from Madeleine L’Engle’s book, “A Wrinkle in Time”. I actually believed It would have been handy to collapse time and space during the many tiring walks home from Rivonia primary school to Sandton, an 8-kilometer road-trip. Eventually, I found the, “how to tesseract” instructions. They were disappointingly simple, and said in essence; “If you’re traveling to any destination, you need to visualize yourself already there.” That was all there was to it.

Later, my junior high friends had missed the bus and had to all walk the 8k’s home. I was wishing we had a ride as we walked the same distance home from the Rivonia high school. I explained my theory from my pre-teens, and motivated by my tale, we all did it — we visualized arriving at our warm, cozy destinations in Sandton. Applying the plan didn’t last long since nothing noticeable happened; so our discussions went back to whatever we had been talking about.

Suddenly we were home. Someone said, “Wow, your plan worked.” It was just that simple — our atoms never dispersed and re-organized; there were no special effects. The walk home was simply over before we realized it. Because of that day, my scary reputation had been favorably enhanced by my popularity with the boys. It was amazing, as it also deterred girls that were being mean to me. I later understood that my friends and I must have effectively made a “quantum leap” or something close to it.

I often used this method on long trips, during boring lectures, and practically anytime I preferred to be somewhere other than where I was at a certain point. More often than not, the trip or class, seemed over before I knew it.

So, I guess, I’m a quantum traveler at heart. Lol.