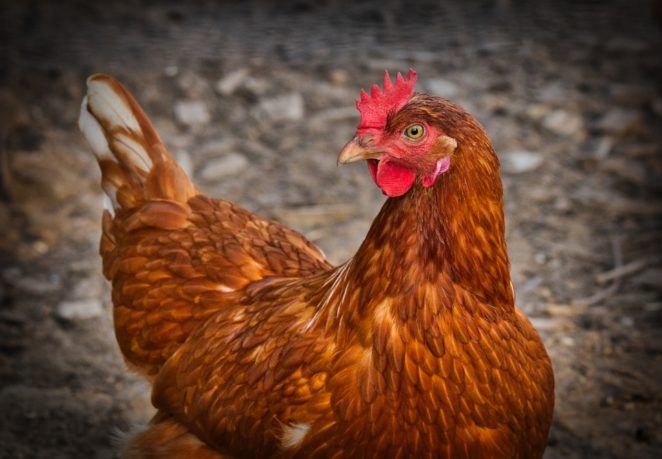 I’m honestly not trying to be cryptic. About five years ago, we got four chickens. All of them were hens and all of them were laying eggs. Each was a couple of years old, as best I can judge, so they weren’t young chickens, even then. That was the ‘old’ that I’m referring to.

It took me a couple of days, but first I staked out an 8-foot by 16-foot area and sunk four-inch by four-inch treated posts. Then I put up chicken-wire fencing, six-feet high and put the chicken mesh over the top as well so that hawks and eagles wouldn’t be inclined to have chicken dinner at my expense.

I put in a door with hinges so I could easily get in and out to feed, water, and clean their enclosure.

Next, I built a chicken hutch, three feet wide, four feet long, and three feet tall. I didn’t have plans to work with, so just figured it out in my mind. The hardware store didn’t have plywood, they only had fiberboard, so I had to make it out of fiberboard with 2 x 2 bracing. The top is designed to be removable. I put it on a wooden pallet to lift it off the ground a few inches and put about a half-foot of straw in it.

The chickens seemed quite happy with the housing arrangement and for some time, we were harvesting 6 eggs per day. That isn’t bad for four chickens. The wacky thing is that the silly birds thought that they were pets. They would follow me around whenever they could see me, the whole while ‘talking’ to me. If I went into the pen, they would cluster around me, demanding to be petted.

I was very concerned the first winter because we not only had several feet of snow but also the temperature dropped to -40 F and for over a week, it didn’t get above 0 F. I needn’t have worried because they got along just fine. During the coldest periods, they simply stayed in the hutch, huddled together for warmth. I did have to go out several times a day with warm water because the water froze in a short time, but the chickens remained healthy and kept laying, even in the winter.

After three years, two of the chickens died, apparently of old age, though that is supposition on my part. The other two continued to go on as if nothing was out of the ordinary, still thinking that they were pets. A couple of times, they’ve even gotten out of their pen and when I’ve gone out, they’ve immediately come up to me to get picked up and let back into the pen.

Last week, sadly, one of the chickens died. She was an old bird, but the other chicken isn’t sure what to do without her buddy. She is the only one left. I named her bock-bock because that is what she says every time she sees me.

I have no idea how long she will live, but she certainly can’t survive, even in the hutch, alone in the winter. So, and this is the ‘new’ part, two days ago we went and bought six chicks. I’m hoping that they will be old enough that during the coldest part of the year, they can be in the pen with bock-bock to keep her warm. Otherwise, we’ll have bock-bock in the house, which isn’t my preference.

The chicks are just over a week old and are already growing fast. We got six because they weren’t sexed, so the chances are that there are at least two roosters. We can’t have roosters in the city limits, so the roosters will be done away with.

As for bock-bock, I let her out of the pen when I’m out in the yard and she follows me around, munching on earwigs, worms, slugs, and just about any other similar critter she can find. When it is time for me to go in, she follows me back to the pen and goes inside so I can shut the door.

Chickens aren’t the most intelligent of animals, but this one still thinks she is a pet.